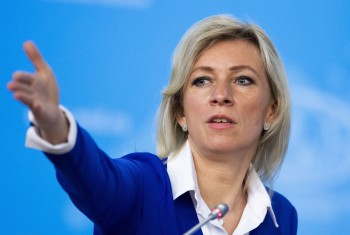 FILE - In this Friday, Jan. 17, 2020 file photo, Russian Foreign Ministry spokesperson Maria Zakharova gestures as she attends Russian Foreign Minister Sergey Lavrov's annual roundup news conference summing up his ministry's work in 2019, in Moscow, Russia. Russia's Foreign Ministry has accused the Financial Times and the New York Times of spreading "disinformation" after the two newspapers alleged that Russia's coronavirus death toll could much higher than officials report. The Ministry’s spokeswoman Maria Zakharova said Wednesday May 13, 2020, that letters demanding a retraction would be passed on to editors in chief of the newspapers on Thursday. (AP Photo/Alexander Zemlianichenko, File)
Russia's Foreign Ministry said Thursday that Moscow has never delivered weapons to the Taliban movement in Afghanistan, countering U.S. allegations.

Ministry spokeswoman Maria Zakharova rejected the claim by U.S. Secretary of State Mike Pompeo, who said Wednesday that he had repeatedly raised the issue during his talks with the Russians.

“Russia has only supplied weapons to the legitimate government of Afghanistan, which is well known,” Zakharova said at a briefing.

On Wednesday, Pompeo said that "the Russians have been selling small arms that have put Americans at risk there for 10 years.”

He added: "When I meet with my Russian counterparts, I talk with them about this each time: ‘Stop this.’”

Russia, which has long been critical of the U.S.-led operation in Afghanistan, welcomed February's peace deal between the U.S. and the Taliban aimed at ending the protracted war.

Zakharova didn't comment Thursday on reports that Moscow offered bounties for killing U.S. troops in Afghanistan, but other Russian officials have denounced them as fake.

Earlier this week, Zamir Kabulov, a top Russian diplomat who serves as Russian President Vladimir Putin’s representative on Afghanistan, described the bounty allegations as a reflection of the U.S. political infighting, and charged that they could have been spread by “forces that don’t want to leave Afghanistan and are willing to justify their failure.”
Story Code: 93290
Short url: http://www.payam-aftab.com/vdce7w8o.jh8xoik1bj.html
Source : Associated Press
Russia Foreign Ministry: NYT article on Russia in Afghanistan fake from US intelligence
Kabulov asks Turkey to join Moscow format
Russian envoy arrives in Pakistan to ‘discuss Afghan peace’
Russia-India-China foreign ministers to meet soon to discuss Afghan situation & fluidity in geo-politics
Russian Minister: Delhi and Moscow are very much in sync on future of Afghanistan
Copyright© Payam-aftab.com, all rights reserved