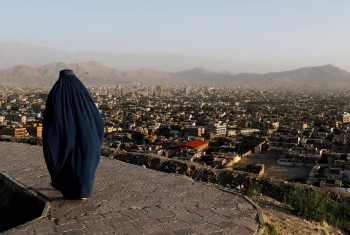 Women and girls with disabilities living in Afghanistan face discrimination, sexual harassment, and several other barriers to accessing basic rights. The COVID-19 coronavirus crisis is making it even more difficult for them, according to a new report.

The organization Human Rights Watch released the report titled “Disability Is Not Weakness: Discrimination and Barriers Facing Women and Girls with Disabilities in Afghanistan” on Monday.

The report authors spoke with 26 women and girls with disabilities and their families, and 14 health and education professionals in Kabul, Herat, and Mazar-e Sharif. Women and girls in these cities are being denied access to government assistance, health care, and schools, which should all be protected by the Afghan constitution and international human rights law, the report said.

"All Afghans with disabilities face stigma and discrimination in getting government services, but women and girls are the 'invisible' victims of this abuse," Patricia Gossman, associate Asia director at Human Rights Watch and author of the report, said.

For women who live in rural areas far away from health centers and who lack access to transportation, seeking care is especially a challenge, Gossman added.

People with disabilities generally experience more discrimination, stigma, and barriers to information and lack of protection makes them more susceptible to exposure to the risks of COVID-19. Women and girls with disabilities are less likely to receive assistance due to inadequate health services and the crisis will make it even more difficult for women and girls to receive care, Gossman said. They are also more vulnerable to gender-based violence, according to the organization Women Enabled International.

"Women and girls with disabilities experience violence from partners and family members at least two to three times the rate of other women, and during lockdowns, shelter-in-place orders, and other times of mandatory or recommended isolation, these individuals will be even less able to escape violence, particularly if their usual supports are not available to them," Women Enabled International said in a statement released to Global Citizen.

Afghanistan has one of the world’s largest populations per capita of people with disabilities, according to Human Rights Watch. Decades of conflict in Afghanistan have devastated government institutions and stalled relief efforts meant to help the country’s most vulnerable communities. Many people with disabilities have not been able to obtain the necessary national identity card to utilize government services.

Afghan women and girls with disabilities are frequently rejected in several parts of society. They deal with humiliation at home or in public, are considered shameful by their families, or are denied access to public spaces and community or family social events, the report said.

Families are also more likely to keep Afghan girls with disabilities home from school because they have safety concerns or can’t afford to send them.

"The government needs to ensure that anyone with a disability gets the assistance they need, now and in the future," Gossman said.
Story Code: 92590
Short url: http://www.payam-aftab.com/vdcgzn9y.ak9xy4j5ra.html
Source : Global Citizen
Afghanistan: Women with Disabilities Face Systemic Abuse
Govt: Women’s Rights will not be Ignored in Taliban Talks
Afghan women lose trust in US forces
Afghan women face discrimination
Fraud Surrounds Women Voters in Afghan Election