Remshay Ahmed
Pakistan which has been a harbinger of peace in Afghanistan; even before 9/11 necessitated the coining of the term. Pakistan now finds itself at a crossroads – wrestling with the COVID-19 pandemic with its role in Afghanistan far from over, even after the signing of the Doha Peace Deal.
Date of Publication : Saturday 9 May 2020 15:57 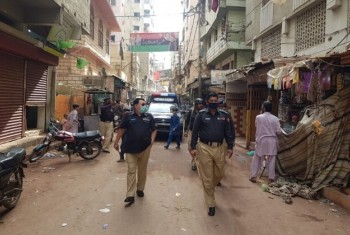 Pakistan which has been a harbinger of peace in Afghanistan; even before 9/11 necessitated the coining of the term. Pakistan now finds itself at a crossroads – wrestling with the COVID-19 pandemic with its role in Afghanistan far from over, even after the signing of the Doha Peace Deal.

The US-Taliban Talks marked the advent of insurgent diplomacy as a useful tool in negotiating an armistice and affecting policy change. With the Taliban being the first in such a series of interactions, the greatly revered Doha Peace Deal signed between the US and Taliban, and facilitated by Taliban is only a precursor of the actual Afghan peace process.

This pandemic has presented itself as both a leveraging point, as well as a challenge. While fragmented intra-Afghan talks persist, COVID-19 is an opportunity for the Taliban to come to the fore in the midst of a series of interactions between the US and Afghan government, while Pakistan’s role remains of paramount importance.

On Afghan soil, the partial truce, with occasional skirmishes, lasted for a week up to the signing of the deal, but was broken just two days after when the Taliban ordered fighters to resume operations against Afghan forces. This is now a persistent trend, and has thwarted the process for intra-Afghan negotiations to take place, for which the prerequisite was the release of 6,000 prisoners by each side. But this not the only hindrance towards peace in Afghanistan. Michael Kugelman, Senior Associate at The Wilson Center, Deputy Director at Asia Program, notes, “The Doha deal wasn’t a peace deal, because it didn’t call for an end to the fighting. It created a path to peace by calling for peace talks to begin.”

Prisoner swap amidst mounting death and infection tolls is a challenge and an opportunity. It is an opportunity in the face of growing global concern for the release of prisoners to contain the spread of COVID-19. A challenge, because the release of prisoners is itself a leveraging point. Both sides want to drive a hard bargain. The Afghan administration has urged the Taliban to start intra-Afghan talks, citing the prisoner swap can be completed in the meantime. But this too is impossible with the lack of clarity in terms of Afghan leadership. Political turmoil stemming from the ongoing row between self-proclaimed president Abdullah Abdullah and President Ashraf Ghani presents a divided front for the negotiation process to begin.

Failure to kickstart the talks will ultimately delay the actual peace process to take place. According to Hamdullah Hamdard, a political analyst based in Kabul, “The Doha Peace Deal’s implementation stage is faced with a number of challenges including but not limited to lack of coordination between the Afghan government and Taliban on prisoners’ exchange, and increase of violence by both sides for ensuring further control over most parts of the country amid COVID19 pandemic.” If violence persists, though reduced, intra-Afghan talks would be delayed and the narrow window of opportunity that exists would cease to be. Hamdard further adds, “This (ongoing) situation will either lead the country to a quick start of the intra-Afghan peace talks or deteriorate the smooth progress of the Afghan peace negotiations process. In the first case there is the possibility of a win-win peace deal. However, in the second case there is the risk of fatal civil war in the country.”

The latter will present an Afghanistan the world has always been familiar with; with roughly the same main actors. To avoid this situation, as has been historically the norm, the US State Department has announced that their special envoy Zalmay Khalilzad would soon be visiting Pakistan and India.

As the inconclusive political turmoil between two presidents persists, what can Pakistan do in steering the ongoing tussle towards intra-Afghan talks? While Islamabad’s role was applauded at the signing of the Doha deal, it now faces challenges of its own. The COVID-19 pandemic and the debate between lifting and imposing lockdown measures has weakened the government at home. Internationally, the ongoing nine-month long siege in Indian Occupied Kashmir and regular ceasefire violations have exhausted the country’s agencies. Would it be morally justified to support the cessation of hostilities in one country while failing to garner support in another; when having a stake in both conflict zones? India has been trying to gain some footing in Afghanistan, but to little success. Trump criticised India for its role in building a library in Afghanistan, making it appear as a real insignificant contribution.

This nexus between Pakistan, India, and the US for peace and stability in Afghanistan will further derail the peace process, and introduce more regional actors which would significantly complicate the political scenario. As Kugelman notes, “I don’t think it’s realistic for Pakistan to be a regional negotiator, whether during a pandemic or after the pandemic is gone. Pakistan can be helpful as an informal mediator to push the two sides to move forward, but Kabul mistrusts Pakistan too much for Islamabad to be a formal regional negotiator. It was a lot different during the US-Taliban talks, because both Washington and the insurgents wanted Pakistan to play a prominent role. Don’t expect the Afghan state to want Islamabad to be front and centre in its talks with the Taliban.”

With this air of mistrust, and accelerating tensions between India and Pakistan, how the regional actors will present a united front to the Taliban is a question that is yet to be answered. This, coupled with the lack of consensus in Afghanistan and the ongoing pandemic, will move discussions much farther away from what needs to be done, and instead allow the Taliban to break away from any formal deal, using violence to create even greater leverage. However, this time the Taliban can employ this influence for establishing armistice and a ‘new normal’ based on their values.

Significant literature on diplomacy employing Game Theory models uses a system of values to understand how negotiations take place. With healthcare systems and subsequently economies collapsing worldwide, who is to say any longer that this world, based on our negotiated values of governance, is any better? Perhaps, if the insurgents can deliver on their promises of a functional system of public goods, they can garner support both domestically and internationally.
Story Code: 92684
Short url: http://www.payam-aftab.com/vdcayino.49nua1gtk4.html
Source : nation.com.pk
Ending Afghanistan’s Endless War: The Pakistan Factor
US-Taliban Deal Provides Opportunity for Reconciliation in Afghanistan: Pakistan
Pakistan, Afghanistan trade at standstill
Did Pakistan Win the Afghanistan War?
Pakistan urged to allow cargo containers to cross into Afghanistan
Copyright© Payam-aftab.com, all rights reserved