'EU should oppose US sanctions amid virus pandemic'

Iran's Ambassador to Belgium Gholam Hossein Dehqani has warned of the adverse consequences of unilateral and illegal US sanctions on the Islamic Republic's fight against the deadly new coronavirus, urging the European Union to oppose Washington's restrictions.
Date of Publication : Sunday 5 April 2020 14:33 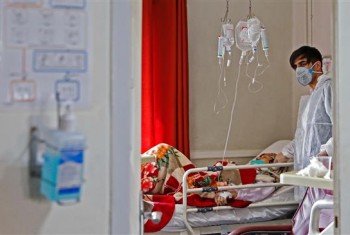 An Iranian medic attends to a patient infected with the COVID-19 virus at a hospital in Tehran on March 1, 2020. (Photo by AFP)
Iran's Ambassador to Belgium Gholam Hossein Dehqani has warned of the adverse consequences of unilateral and illegal US sanctions on the Islamic Republic's fight against the deadly new coronavirus, urging the European Union to oppose Washington's restrictions.

In a Saturday letter to Josep Borrell, the EU’s high representative for foreign affairs, Dehqani added that  the “unilateral and illegal sanctions imposed by the United States on Iran under the guise of its 'maximum pressure' campaign undermine the country's ability to effectively battle the virus without any international support in the long run.”

He pointed to lack of medical equipment vital for fighting the pandemic in Iran and said a number of Iranian doctors and nurses along with ordinary people have lost their lives since the coronavirus outbreak.

The diplomat emphasized that international bodies have welcomed Iran's request to oppose the inhumane US sanctions, while their relevant officials have said that continued economic sanctions infringe the ordinary citizens' rights to meet their basic needs.

Dehqani further called on Borrell to bring the issue to the attention of EU foreign ministers so that they can also stand by the Iranian people and support their “legitimate demand” for the end of the US sanctions, which violate international law and UN Security Council Resolution 2231.

Although many countries are grappling with the coronavirus pandemic, it is not possible to get out of this crisis except through collective measures, he concluded.

The United States has refused to lift sanctions on Iran and even tightened them several times in recent weeks, making it almost impossible for the Islamic Republic to access life-saving medications and medical equipment.

Iran says the unilateral US sanctions have seriously hampered its fight against the pandemic.

Iran's Ambassador and Permanent Representative to the UN office in Geneva Esmaeil Baqaei Hamaneh said on Friday that the United States' medical sanctions against the Islamic Republic constituted an "unprecedented threat" to global public health, urging the international community to react in earnest to Washington's restrictions.

In a letter to Director General of the World Health Organization (WHO) Tedros Adhanom Ghebreyesus, Baqaei Hamaneh said imposition of the cruel and illegal sanctions on Iran, which has resulted in the ordinary Iranian people being denied access to medicine and medical equipment and services, clearly exemplifies a crime against humanity.

The head of the Citizens Rights Faction in Iran’s Parliament, Abdolkarim Hosseinzadeh, said on Saturday that a triple-urgency motion has been submitted to the Presiding Board on imposing a full quarantine on the country to prevent further spread of the deadly disease.

Hosseinzadeh told the Iranian Students' News Agency (ISNA) that the motion, signed by 16 lawmakers, has one Article and 11 Notes.

He added that it would be discussed at the first open session of the parliament, which would be held to adopt strategies in the country's fight against the coronavirus.

Speaking during a meeting in the National Headquarters to Fight the Coronavirus on Saturday, Iranian President Hassan Rouhani said the country seeks to follow up on its existing physical distancing plan with a new “smart distancing” initiative to curb the outbreak of COVID-19.

Rouhani added that the first and second phases of the country’s physical distancing plan had attained “good achievements” and added, “Currently, we are in the third phase which consists of smart distancing; its specifications have to be laid out.”

Iran has set out specific guidelines restricting certain occupations and transit in and between cities as part of the physical distancing initiative to contain the coronavirus outbreak.
Story Code: 92372
Short url: http://www.payam-aftab.com/vdcewx8o.jh8wfik1bj.html
Source : Press TV
‘Covid Can’t Compete.’ In a Place Mired in War, the Virus Is an Afterthought.
Afghanistan extends lockdown amid upward COVID-19 trend
In random test of 500 in Afghan capital, one-third has virus
Civil war, poverty and now the virus: Afghanistan stands on the brink
COVID-19: Afghanistan begins free bread drive for poor
Copyright© Payam-aftab.com, all rights reserved