As the COVID-19 pandemic death toll grows and the number of those infected creeps past one million confirmed cases, worldwide, the Palestinian health workers of Gaza and the West Bank try desperately to prevent the spread of the virus in the occupied territories. Unfortunately, however, this effort has been severely compromised by the Israeli occupation forces.
Date of Publication : Sunday 5 April 2020 14:26 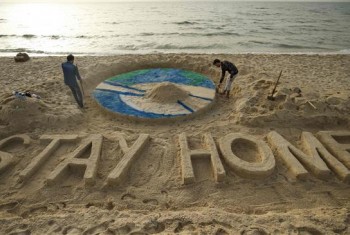 Palestinian artists work on a sand sculpture depicting the earth with a message reading "Stay Home" along a beach in Gaza City during the COVID-19 coronavirus pandemic, on March 31, 2020. (AFP photo)
Robert Inlakesh - As the COVID-19 pandemic death toll grows and the number of those infected creeps past one million confirmed cases, worldwide, the Palestinian health workers of Gaza and the West Bank try desperately to prevent the spread of the virus in the occupied territories. Unfortunately, however, this effort has been severely compromised by the Israeli occupation forces.

An issue almost completely overlooked by Western corporate media, is the issue of Israeli persecution of Palestinians during the ongoing pandemic. This major cover-up comes despite the fact that there is currently round the clock coverage of the impacts of the novel coronavirus.

Israel has continued its brutal policies of mistreatment of Palestinian political prisoners, massive arrest campaigns, break-ins, killings, bombings and even crimes specific to the pandemic, which we are currently living through, such as the destroying emergency clinics which have been set up to deal with the virus outbreak and also the dumping sick Palestinians outside of checkpoints.

If ever there was a time that the world would see unity between the oppressed and the oppressors, it would surely be at a time when the whole world is collectively under attack by an enemy of the collective which is not only infecting and killing people, but destroying the world economy. However, unfortunately, this has not been the case between Palestinians and the Israeli occupation.

Just in the past few weeks alone, Israeli occupation forces have continued arresting and detaining Palestinian minors in both the West Bank and East Jerusalem al-Quds. Also continuing to raid and attack Palestinians who are attempting to self isolate and practice social distancing in order to combat the spread of COVID-19.

On Sunday the 22nd of March, Israeli occupation forces killed a 32 year old Palestinian man, from the village of Nilin (near central Ramallah), in the West Bank. The 32 year old was shot in the head whilst driving his car and according to his family was simply running errands. Since then, dozens more have been shot and severely injured.

Palestinian political prisoners who are currently being held in Israeli prisoners are also fearful for their lives, some announcing hunger strikes over the lack of precautionary measures taken by the Israeli prisons. All Palestinian prisoners will now be essentially in the dark, as social distancing measures are in place, preventing any physical communication with loved ones. On top of this, a recently released Palestinian prisoner has, according to reports, tested positive for the novel coronavirus.

Israeli artillery strikes have also been reported as having hit three different areas inside of the illegally besieged Gaza Strip, just last week. Israel claimed this came after an unspecified number of rockets were fired, no damage was reported inside of Israel however. This bombardment of Gaza ignores the UN global call for ceasefire, which Israel has joined the likes of Saudi Arabia and the United States in already abandoning. Israel has continued running mock raids on Gaza since last week's airstrikes.

Israel has also been documented as having dumped Palestinians who work in illegal settlements, randomly, outside checkpoints after the workers have displayed signs of sickness. One specific case gathering a lot of attention on social media, the Palestinian Health Ministry later confirmed that the man who had been featured in the video, did not test positive for the virus.

What Israel shows with its dealings with sick Palestinian workers, demonstrates its clearly racist views towards Palestinians, treating Palestinians as if they were animals that can be simply discarded of if they seem to pose a health risk.

According to Israeli Human Rights Organization BTselem, on the 26th of March, the Israeli military stormed the Palestinian village of Khirbet Ibziq, accompanied by a military escort with a bulldozer and two cranes, which they used to demolish an emergency clinic and community housing. The facilities were created to deal with the outbreak of the virus, which the Palestinian Authority, based in Ramallah, are ill-equipped to deal with in the event that the disease becomes more wide spread. The Israeli forces also confiscated equipment being used to combat the spread of COVID-19 on that day.

These are but only a sample of the problems faced by Palestinians under occupation, when it comes to dealing with the outbreak of COVID-19. But without using more examples of racist persecution, it is essential that we ask the question; that if Israel cannot put aside its dehumanizing tactics used against the Palestinian people now and cannot put aside its racism during a global pandemic, what will defeat this divisive mentality of the occupier?
Story Code: 92371
Short url: http://www.payam-aftab.com/vdcdfs0n.yt0x56me2y.html
Source : presstv.com
Afghanistan extends lockdown amid upward COVID-19 trend
In random test of 500 in Afghan capital, one-third has virus
Civil war, poverty and now the virus: Afghanistan stands on the brink
COVID-19: Afghanistan begins free bread drive for poor
Trump tells advisers U.S. should pull troops as Afghanistan COVID-19 outbreak looms
Copyright© Payam-aftab.com, all rights reserved