Pakistan urged to allow cargo containers to cross into Afghanistan

​The Afghan government has requested Pakistan to allow the Afghan transit cargo to cross into Afghanistan under standard fumigation procedure to maintain the supply chain of medicines, foods and other basic goods for the people of Afghanistan.
Date of Publication : Saturday 4 April 2020 17:22 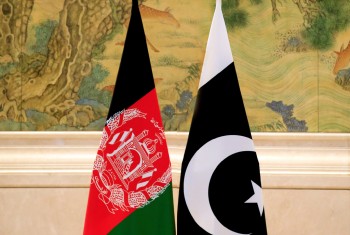 The Afghan government has requested Pakistan to allow the Afghan transit cargo to cross into Afghanistan under standard fumigation procedure to maintain the supply chain of medicines, foods and other basic goods for the people of Afghanistan.

In a letter sent to the ministry of foreign affairs, the consulate-general of the Islamic Republic of Afghanistan here said that 1,657 transit trade containers had been stuck in Chaman and 351 in Torkham. Besides, 2,000 containers carrying export goods from Pakistan were waiting at Torkham and Chaman borders to be allowed to move across the border into Afghanistan.

Moreover, approximately 10,000 containers of transit trade were stranded at Karachi port, disrupting the supply of medicine, food and other basic goods for the people of Afghanistan.

The consulate-general suggested to the ministry to allow the traffic in transit under supervision of joint authorities and that the drivers/cleaners would remain in their vehicles with hand gloves and face masks and the Afghan labor would offload the cargo without any physical contact with Pakistani driver/cleaners at the Bab-e-Dosti border and simple procedure of fumigation may also be adopted for all vehicles stopped en-route Pak-Afghan border to maintain the supply chain of foods, medicines, merchandise and other goods.

The consulate also requested the ministry to direct terminal operators and shipping companies to waive demurrages and detention charges on Afghan Transit consignments.

Meanwhile, the Directorate-General of Transit Trade (DGTT) in its letter confirmed that the consulate-general of the Islamic Republic of Afghanistan at Karachi through a letter informed them about the mounting demurrage and detention charges on containers stuck up in ports of Pakistan and the customs border stations at Chaman and Torkham due to closure of the western border.

They requested the government to look into the grievances of the Afghan traders and to liaise with concerned authorities for finding out a way to waive off demurrages and detention charges.

The Directorate said that the moratorium on transit trade activity at the western border has resulted in tremendous difficulties being faced by Afghan traders and other stakeholders due to anticipated escalation in the cost of doing business.

Therefore, terminal operators and shipping companies have been requested to allow waiver of demurrages and detention charges on all containers lying at the port until all containers have crossed the border after resumption of trade activities at the western border, the directorate added.
Story Code: 92362
Short url: http://www.payam-aftab.com/vdcdxs0n.yt0x96me2y.html
Ending Afghanistan’s Endless War: The Pakistan Factor
Pakistan and COVID-19; enabling peace in Afghanistan?
US-Taliban Deal Provides Opportunity for Reconciliation in Afghanistan: Pakistan
Pakistan, Afghanistan trade at standstill
Did Pakistan Win the Afghanistan War?
Copyright© Payam-aftab.com, all rights reserved