Having already lived through decades of war, Afghans are now bracing themselves for another battle against COVID-19. The world cannot stand idly by.
Date of Publication : Saturday 4 April 2020 17:12 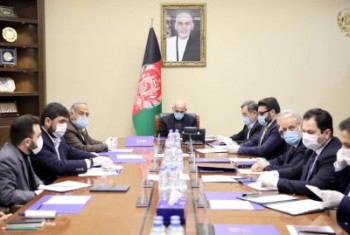 Ashraf Ghani
As countries around the world compete to shut their borders to contain the coronavirus, one crossing is more porous than ever – Afghanistan’s western border with Iran. Over the past two months, tens of thousands of Afghans have returned from Iran, where COVID-19 has already killed more than 3,000 people and infected over 50,000. They could be bringing a ticking time bomb with them.

Afghanistan’s health system – wracked by decades of conflict and under-resourcing – is not equipped to deal with the virus on its own. Children are particularly vulnerable to the crisis, especially the millions who are already living in poverty, facing malnutrition, or who have been forced from their homes and linger in squalid displacement camps. The daily challenges they face – getting enough food to eat, reaching schools, or seeking healthcare – will only be magnified as the virus squeezes supply lines and diverts already meagre government resources.

Afghanistan is in the midst of an almost perfect storm of challenges. The conflict is the deadliest on earth for children, with the UN estimating 10,392 civilian casualties in 2019 alone – the sixth year in a row that numbers have topped 10,000. This year, almost a quarter of the population (9.4 million people) will need humanitarian assistance, more than half of whom are children.

Afghanistan has also been gripped by a political crisis since the disputed presidential election in 2019, leading to two parallel governments being declared back in February. While there are frantic efforts to iron out a compromise between the two sides, for now much of government has ground to a halt. The deadlock has also delayed peace talks with the Taliban indefinitely.

Now, the need to contain a global pandemic has been added to an already combustible mix.

The number of COVID-19 cases in Afghanistan has been relatively low so far, with less than 300 confirmed and six deaths recorded. It is impossible to know the real extent of the virus’ spread, however, not least because of the limited testing capacity in the country. As of April 2, fewer than 2,000 people had been tested, with most of the response coordinated from a single lab in Kabul.

Of particular concern are the large-scale returns from Iran, where close to 4 million Afghan refugees and migrants live. The government in Kabul tried to close the border on February 23 but was forced to open it again just a day later, as tens of thousands of people fleeing the virus were trapped in no-man’s land between the countries. Close to 75,000 people returned just in the first two weeks of March, according to the International Organization for Migration.

The local government and international aid agencies have tried hard to provide the testing and healthcare needed along the border but have been overwhelmed by the sheer number of people. It is no surprise that the vast majority of COVID-19 cases so far have been found in the western province of Herat along the Iranian border. Many thousands have already returned home to other far-flung provinces, and we will only know the true extent of the virus’s spread in the coming weeks as people start to get sick.

The toll the virus has taken on global financial markets also poses a serious threat. Foreign aid amounts to almost 20 percent of the total gross national Afghan income, and more than 75 percent of the government’s national budget. If donor governments start cutting aid to recover from a virus-induced financial crisis, the consequences for Afghans would be severe.

Afghanistan needs our help now more than ever. The international community must support the government of Afghanistan and humanitarian actors to scale up their response as soon as possible.

This must involve funding for badly needed resources like testing kits, protective equipment for health workers, and ventilators for the very sick. Priority must be given to the most vulnerable and hard-to-reach communities, including people with pre-existing health conditions and malnourished children – of whom there are 2.5 million in Afghanistan. Neighbouring countries must ensure that any border closures do not affect vital supply lines, including access for key workers (among them, aid workers).

It is equally crucial that all parties to the conflict immediately heed UN Secretary-General Antonio Guterres’ call for a global ceasefire during the pandemic. The attack by the Islamic State on Sikh worshippers in Kabul last week – which killed at least 25 people, including children – was another horrific reminder of the human cost of the conflict.

Having already lived through decades of war, Afghans are now bracing themselves for another battle against COVID-19. The world cannot stand idly by and let them face this alone.