Gulbuddin Hekmatyar, who is a possible candidate for the upcoming presidential elections, said on Thursday during a ceremony in capital Kabul that both the Soviets and NATO imposed their puppet governments on the people of Afghanistan.
Date of Publication : Thursday 21 February 2019 14:32 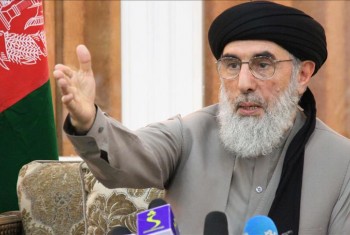 Marking the anniversary of the popular uprising against the occupation of the country on 21 February from the Soviet side, said: “both foreign forces imposed their installed governments on the Afghan people”.
Mr Hekmatyar considers puppet governments and the presence of foreign forces as the main factors behind the ongoing war in the country.
The leader of Hezb-e Islami Hekmatyar called those Mujahidin, who formed an administration in Kabul as “dependent factitious Mujahidin”.
Gulbuddin Hekmatyar offered the Taliban to accept a ceasefire, consider elections as the only way for legitimization and to turn to Intra-Afghan dialogues.
“A qualified and competent address should be created for peace,” he added, saying that “peace would not be provided by the consultative board and holding ceremonial Loya Jirga”.
He also offered the government to pay Taliban fighters’ expenses during the ceasefire.
Hekmatyar criticized the government over parliamentary elections, saying that the government is responsible for the calamity of October parliamentary elections.
“The election commission is the “corporation” of the presidential palace (Arg) and Sepidar palace,” he said.
He accused the government of undermining the political parties as well as engineering the elections.
Story Code: 88886
Short url: http://www.payam-aftab.com/vdcjmoeo.uqeooz29fu.html
Reporter : Hafizullah Rajabi
Talks hosted by Russia will not help in peace process, says Afghanistan
Afghanistan endangered by US imparting political legitimacy to Taliban
Khalilzad meets Uzbekistan’s officials on Afghan peace
Khalilzad skips India
Khalilzad resumes shuttle visits
Copyright© Payam-aftab.com, all rights reserved