Khalilzad says focus on peace accord, not withdrawal agreement

US Special Representative for Afghanistan Reconciliation, Zalmay Khalilzad, who is on a six-nation trip to discuss the Afghan peace process said Tuesday while meeting with EU and NATO partners in Brussels that their shared purpose is to reach a peace agreement and not a withdrawal agreement.
Date of Publication : Tuesday 12 February 2019 11:39 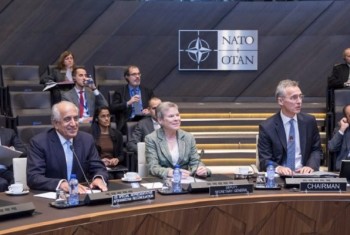 “Our shared purpose is to reach a peace agreement (not a withdrawal agreement) that is worthy of the sacrifices made over decades of war," Khalilzad tweeted.
Khalilzad said in a tweet he met with EU and NATO partners in Brussels and was encouraged by their strong endorsement on the progress they have made regarding the peace process so far.
"We went into Afghanistan together, and together we will determine our future posture, based on conditions we determine with Afghans. We also agreed that jumpstarting the intra-Afghan dialogue is an immediate priority," Khalilzad tweeted.
Khalilzad is leading an interagency delegation to Belgium, Germany, Turkey, Qatar, Afghanistan, and Pakistan from February 10 – 28, the US State Department said in a statement on Sunday.
“This trip is part of an overall effort to facilitate a peace process that protects US national security interests and brings all Afghan parties together in an intra-Afghan dialogue through which they can determine a path for their country’s future,” it said.
“He will meet with our allies and partners to discuss mutual efforts to advance that goal and will consult with the Afghan government throughout the trip,” the statement read.
This comes after acting US Secretary of Defense Patrick Shanahan met with President Ashraf Ghani on Monday in Kabul to reaffirm commitment to Afghanistan through the implementation of Trump’s South Asia strategy.
The leaders discussed a broad range of defense issues, including the importance of the US-Afghan security relationship and of achieving a political settlement to the war that ensures Afghanistan is never again used as a safe haven for terrorists, the Pentagon said.
“Secretary Shanahan praised the sacrifices made by Afghan and Coalition troops and reaffirmed our continued support to Afghan forces as they lead the fight to defend their country,” according to the Pentagon. Afghanistan
Shanahan arrived unannounced in Afghanistan on Monday to meet with US commanders and Afghan leaders.

Story Code: 88624
Short url: http://www.payam-aftab.com/vdcjxmeo.uqeo8z29fu.html
Reporter : Hafizullah Rajabi
Taliban sit for second day with Afghan leaders in Moscow
Gen. Votel: ​Afghan Government Must be part of Talks
​US vow to withdraw half of Afghan troops by April, Taliban said in Moscow
​Over 700 US soldiers set to return home after seven-month deployment
End game in Afghanistan