​Taliban to take part in ‘intra-Afghan’ talks in Moscow

The Taliban say they will participate in what they call "intra-Afghan" talks in Moscow among prominent Afghan figures, including former President Hamid Karzai and tribal elders — but no Kabul government officials.
Date of Publication : Monday 4 February 2019 10:05 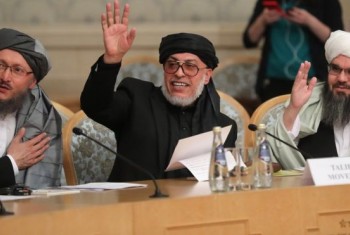 The office of Afghan President Ashraf Ghani has criticized the meeting in the Russian capital, expected on Tuesday, as a gathering of the power-hungry.
Zalmay Khalilzad, the U.S. envoy tasked with resolving Afghanistan's 17-year war, has been pressing for such a dialogue, even as he holds separate negotiations with the Taliban.
The Taliban refuse to talk to Ghani's government, which they denounce as a U.S. puppet.
A statement released on Monday by Afghans attending the Moscow meeting describes it as "the first step toward intra-Afghan dialogue."
The Taliban delegation will be led by Sher Mohammad Abbas Stanikzai.
Story Code: 88406
Short url: http://www.payam-aftab.com/vdch-kn6.23n6vd10t2.html
Source : The State
Reporter : Hafizullah Rajabi
Ghani responds to Taliban threats for attacking elections
​Failed States, Anarchy and resilience Of the Taliban in Afghanistan
Taliban’s ‘Red Unit’ deputy kills with his 12 Men
US envoy for Afghanistan peace meets with Taliban representatives
​Taliban not to attend Afghanistan peace talks in Jeddah
Copyright© Payam-aftab.com, all rights reserved