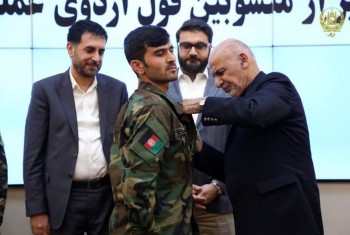 He made the remarks during a ceremony which was organized in ARG Palace late on Saturday to confer medals on some Afghan soldiers who had participated in an operation that resulted into the release of 38 people from a Taliban prison.
According to President Ghani, the Afghan security forces are moving towards self-sufficiency and would not accept a transient peace until a single a drop of blood remains in their body, emphasizing that a peace deal which does not guarantee the role of security forces would not be able be acceptable.
He assured that peace would based on a deal which should clearly outline the role of the national defense and security forces.
President Ghani also emphasized that the Afghan forces are prepared for generations, not for a day, for a year, a decade or one generation.
He said the security forces have the responsibility to fight until a peace deal is reached and there would be no delay in this regard.
Story Code: 88366
Reporter : Hafizullah Rajabi
President Ghani Meets Abu Dhabi Crown Prince
Heading high-level delegation, Ghani in Nangarhar
Ghani says he will never sign new gandamak treaty
Afghan president appoints two new security ministers: too Little, too Late?
Ghani discusses Afghan peace with Saudi King
Copyright© Payam-aftab.com, all rights reserved