Former American ambassador to Afghanistan, Ryan Crocker has likened the recent US-Taliban talks to those between Washington and Vietnam, in 1973, and said “we were just negotiating the terms of our surrender.”
Date of Publication : Wednesday 30 January 2019 14:08 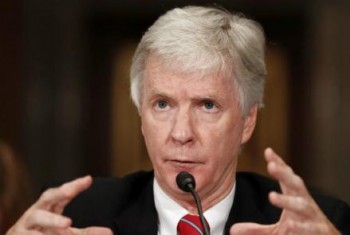 Crocker said in an editorial for the Washington Post, published on Tuesday night, that the framework on peace reached last week between the two groups was done without the involvement of the Afghan government and that by acceding to the Taliban’s demand “we have ourselves delegitimized the government we claim to support.”
The framework agreement was announced on Monday calling for a ceasefire that could lead to the full withdrawal of US troops on condition the Taliban commit to not harboring terrorist organizations that could threaten US security, he wrote, adding: “In other words, the Taliban promised no 9/11 replay.”
“The framework was reached without the involvement of the Afghan government.
“The Taliban has said all along that it refuses to negotiate with the government, considering the government the illegitimate puppet of the US occupation.
“By acceding to this Taliban demand, we have ourselves delegitimized the government we claim to support,” Crocker wrote.
He went on to say this current process “bears an unfortunate resemblance to the Paris peace talks during the Vietnam War”.
“Then, as now, it was clear that by going to the table we were surrendering; we were just negotiating the terms of our surrender.”
He stated that this time around, the Taliban “will offer any number of commitments, knowing that when we are gone and the Taliban is back, we will have no means of enforcing any of them.”
Crocker said it need not be this way. He said the US could announce that talks won’t proceed beyond the framework, to matters of substance, without the full inclusion of the Afghan government.
“Right now, the inclusion of the Afghans is only theoretical.”
He said that the US could also suggest that unless another solution is found, US troops should remain in Afghanistan as long as the current government wants them, protecting the United States’ national security interests and defending core values, such as women’s rights, that have been fostered since 2001.
“President Barack Obama proved in Iraq that the United States cannot end a war by withdrawing its forces — the battle space is simply left to our adversaries.
“In Afghanistan, President (Donald) Trump has a choice. He can follow Obama’s example and leave the country to the Taliban, or he can make clear that the United States has interests, values and allies, and will stand behind them,” said Crocker.
The Republican leader of the US Senate meanwhile also spoke out about a troop withdrawal from Afghanistan and offered legislation on Tuesday urging the United States to keep troops in the country, as well as Syria.
Saying that Islamic militant groups in the two countries continue to pose a “serious threat” to the United States, Senate Majority Leader Mitch McConnell said he had introduced an amendment to a broader Middle East security bill urging a “continued commitment” until al Qaeda, Daesh and other groups are defeated.
“We’re not the world’s policemen, but we are the leader of the free world, and it’s incumbent upon the United States to lead, to maintain a global coalition against terror and to stand with our partners,” McConnell said in a speech in the Senate.
The measure would be an amendment to a broader Middle East security bill being debated in the Senate.
That bill, which includes fresh sanctions on Syria and a measure combating the Boycott, Divest and Sanctions (BDS) movement against Israel, advanced in a procedural vote on Monday.
Trump’s administration has announced plans to bring all US forces home from Syria, saying that Daesh had been defeated.
Separately on Monday, Trump’s director of national intelligence, Dan Coats, told a Senate hearing on worldwide risks that Daesh remains a threat.
This comes after US special envoy Zalmay Khalilzad said on Monday the US and the Taliban have sketched the outlines for an eventual peace accord to end 17 years of war in Afghanistan.
However, there was no sign the group had accepted key US demands such as committing to a ceasefire before a withdrawal of US troops.
Nor did Khalilzad agree in talks with insurgent negotiators last week in Doha to a withdrawal of foreign forces from Afghanistan within 18 months, as Taliban officials claimed, said a State Department spokesperson.
“We have not agreed to any specific timeline for a possible drawdown of troops,” the spokesperson wrote in an email.
Story Code: 88261
Source : Washington Post
Reporter : Hafizullah Rajabi
Taliban sit for second day with Afghan leaders in Moscow
Karzai welcomes progress in U.S.-Taliban peace talks
New Taliban Negotiator Seen as Sign That This Time, Afghan Peace Talks Are Serious
US-Taliban talks’ details revealed
Khalilzad as US Special Envoy for Afghanistan: the Good, the Bad or the Ugly?
Copyright© Payam-aftab.com, all rights reserved