NATO SG: "We continue to stay with the United States in Afghanistan”

The NATO Secretary General Jens Stoltenberg has said the alliance will continue to stay with the United States in Afghanistan.
Date of Publication : Tuesday 29 January 2019 13:38 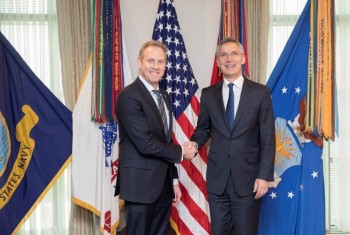 Speaking during a press conference with the acting defense secretary of the United States Patrick Shnahan in Washington, Mr. Stoltenberg said “We continue to stay with the United States in Afghanistan.  We welcome the talks with Taliban.”
He said “Ambassador Khalilzad briefed all allies a few weeks ago, and the reason why NATO is in Afghanistan is to create a condition for peaceful solution to make sure that Afghanistan never again becomes a safe haven for international terrorists and to send a message to Taliban that they will not win on the battlefield, so they have to sit down at the negotiating table, and therefore we are encouraged by what we see now, the progress and — and talks with Taliban.”
This comes as efforts are underway to revive direct peace talks between the Afghan government and Taliban group leaders to end the ongoing violence in the country.
The U.S. Special Representative for Afghanistan Reconciliation Ambassador Khalilzad had earlier said that significant progress has been made on vital issues during the 6-day talks with Taliban political leaders in Qatar.
However, he said a number of issues are still left to work out, emphasizing that he will build on the momentum and resume talks shortly.
Story Code: 88233
Reporter : Hafizullah Rajabi
NATO: US coordinates peace efforts with Afghan government
NATO Opposes ‘Americanization’ of Afghanistan War
3 Americans, 2 NATO troops killed in Afghanistan
India`s congress leader Ahmed Patel: India doesn't need sermons from US on Afghanistan
Ghani: America stays here in Afghanistan
Copyright© Payam-aftab.com, all rights reserved