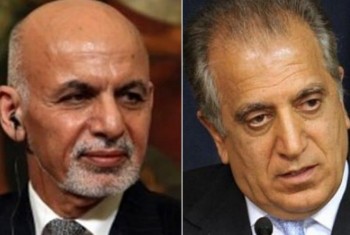 Ambassador Khalilzad rejected the media reports which suggested that the talks also focused on change of political system in the country and said no such discussion has been made, according to a statement by ARG Palace.
He also added that no discussions have been made regarding the formation of a transitional government, emphasizing that he has no authority to discuss such issues but to facilitate intra-Afghan dialogue.
Ambassador Khalilzad said he has only held talks regarding a ceasefire during the meetings with the Taliban leaders but there has been no progress in this regard.
According to Ambassador Khalilzad, the U.S. side emphasized during the meetings that the only way to bring peace is intra-Afghan talks.
The U.S. Special Representative also added that the Taliban leaders demanded the U.S. troops withdrawal but no agreement has been reached in this regard, insisting that if any decision is taken in this regard then a comprehensive discussion would be made in coordination with the Afghan government.
Pointing towards Taliban’s decision to accept or reject intra-Afghan talks, Ambassador Khalilzad he will meet Taliban leaders again to follow up the remaining issues.
Story Code: 88183
Short url: http://www.payam-aftab.com/vdcjtveo.uqeooz29fu.html
Reporter : Hafizullah Rajabi
Quick US pullout to fuel bloodshed, warns Daudzai
Abdullah: Review of security pact with U.S. not to help the security situation
Afghanistan: Geopolitical Situation Revisited
Talking to the Taliban for peace to be useless
Analyst: Afghanistan becoming ‘graveyard’ of US troops
Copyright© Payam-aftab.com, all rights reserved