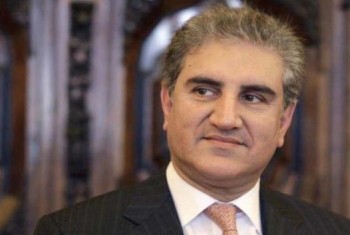 This came after six days of talks between the US and Taliban – talks that were originally scheduled for only two days.
The US team was led by US Special Envoy for Peace and Reconciliation in Afghanistan.
Addressing the media in Pakistan on Sunday, Qureshi welcomed the development and said Pakistan had played a key role in bringing the two sides together.
“Pakistan played a vital role in bringing the US and the Taliban to the negotiation table," he said.
He said Pakistan was concerned about peace in the region, not money.
“We had decided to move forward with peace. The world has accepted Pakistan’s stance on the peace process.”
He also stated peace in the region was not possible without dialogue.
“Pakistan has pursued a regional outlook by reaching out to different countries and advocating its resolve for a stable and peaceful region.”
This comes after the US Secretary of State Mike Pompeo hailed what he called “significant progress” made by Khalilzad.
“Encouraging news from [Khalilzad],” Pompeo wrote on his Twitter page.
"The US is serious about pursuing peace, preventing Afghanistan from continuing to be a space for international terrorism and bringing forces home. Working with the Afghan govt and all interested parties, the US seeks to strengthen Afghan sovereignty, independence and prosperity," Pompeo tweeted.
Pompeo’s optimistic remarks come after Khalilzad said progress had been made in six days of discussions with the Taliban in Qatar.
He cautioned on Twitter that no deal had been finalized with the militants, but he said further talks would resume shortly.
He also said that he was flying back to Afghanistan to discuss the talks.
"Meetings here were more productive than they have been in the past. We have made significant progress on vital issues," Khalilzad said in a tweet.
“We have a number of issues left to work out,” he said, while adding that “nothing is agreed until everything is agreed, and ‘everything’ must include an intra-Afghan dialogue and comprehensive ceasefire.
Taliban spokesman Zabihullah Mujahid said that while there was "progress" at the meetings, reports of an agreement on a ceasefire and talks with Kabul "are not true."
"Since issues are of critical nature and need comprehensive discussions, therefore it was decided that talks about unresolved matters will resume in similar future meetings," Mujahid said.
Story Code: 88154
Reporter : Hafizullah Rajabi
Imran Khan: Political settlement in Afghanistan only viable option
Pakistan’s Qureshi in Qatar for Afghan peace talks
Qureshi Had 'productive meetings' with Afghan leaders
Maulana Sami propose talks between Afghan Ulemas, Taliban in a secret location
In Kandahar, Afghan border forces remove fence built by Pakistan
Copyright© Payam-aftab.com, all rights reserved