Former Afghan President Hamid Karzai has welcomed the progress in peace talks between the U.S. officials and the Taliban representatives in Doha, the capital of Qatar, his office said in a statement on Sunday.
Date of Publication : Sunday 27 January 2019 14:51 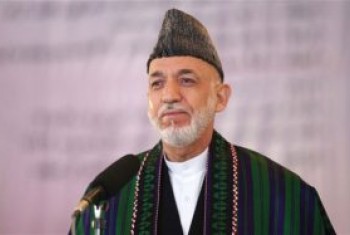 Karzai said that peace and stability in the country are on the nation’s agenda and that a ceasefire should be called in order to end the bloodshed.
“The peace negotiations should be held between Afghans and the outcomes should create national unity, independence, sovereignty, and lead to development,” the statement said.
This comes a day after the U.S. special envoy Zalmay Khalilzad said his six consecutive days of meeting with Taliban representatives were more “productive” than it has been in the past.
“Will build on the momentum and resume talks shortly. We have a number of issues left to work out. Nothing is agreed until everything is agreed, and “everything” must include an intra-Afghan dialogue and comprehensive ceasefire, Khalilzad tweeted.
The Taliban also in a statement late on Saturday confirmed that progress has been made in their meeting with U.S. officials in Qatar; however, they warned that “until the issue of withdrawal of foreign forces from Afghanistan is agreed upon, progress in other issues is impossible.”
Story Code: 88153
Reporter : Hafizullah Rajabi
Taliban sit for second day with Afghan leaders in Moscow
Ex-US envoy says washington has ‘delegitimized’ govt
New Taliban Negotiator Seen as Sign That This Time, Afghan Peace Talks Are Serious
US-Taliban talks’ details revealed
Khalilzad as US Special Envoy for Afghanistan: the Good, the Bad or the Ugly?
Copyright© Payam-aftab.com, all rights reserved