Taliban hold talks with Khalilzad in Qatar, hours after attack on security base

The Taliban have held talks with US special envoy Zalmay Khalilzad in Qatar hours after militants from the group killed scores of Afghan security forces in central Maidan Wardak province.
Date of Publication : Tuesday 22 January 2019 09:50 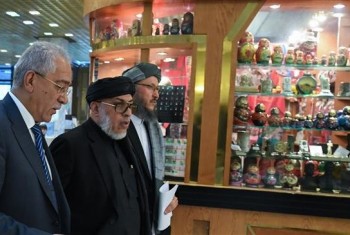 Taliban spokesman Zabiullah Mujahid said in a statement on Monday that the Taliban delegation was holding talks with the US representatives in the Qatari capital Doha.
"Talks between Taliban leaders and US officials have started today in Qatar," the statement read.
A source close to the talks also confirmed members of the Taliban's political office were meeting with Khalilzad in Doha, adding, "They will hopefully finalize a timeline and mechanism of the withdrawal of foreign troops from Afghanistan."
The latest round of talks came hours after the Taliban killed scores of security forces inside a military compound in Maidan Wardak.
Attackers rammed a captured military Humvee packed with explosives into a training center of the National Directorate for Security in the province, west of Kabul. At least two gunmen followed up, spraying the compound with gunfire before they were shot down.
"We have information that 126 people have been killed in the explosion inside the military training center, eight special commandos are among the dead," said a senior official in the Defense Ministry in Kabul, speaking on condition of anonymity.
The developments come as Kabul has stepped up efforts to convince the Taliban to end more than 17 years of militancy amid Washington’s failures on the battleground.
Efforts to negotiate a peace deal to end the US-led war in Afghanistan have been beset by disagreement in recent weeks as leaders of the militant group reject the Kabul government's offer for direct talks.
The US, too, has been holding talks with the Taliban.
The UAE reports tangible results from the latest round of talks between the US and Afghanistan’s Taliban militant group.
Khalilzad has been visiting some regional countries as part of a fresh push to end the long-running Afghan war.
After talks in Abu Dhabi in December, the US envoy said that he had held "productive" meetings in the UAE capital with Afghan and international partners "to promote intra-Afghan dialogue towards ending the conflict."
Khalilzad also said in the Afghan capital on Wednesday that he hoped for fresh talks with the Taliban "very soon" after meetings with them in Doha and Abu Dhabi.
He has said the Taliban seek an agreement on the withdrawal of foreign forces, while the US wants assurances from the militant group that its forces would not be attacked.
The talks in Qatar are the latest in a flurry of diplomatic efforts aimed at putting an end to the war in Afghanistan, which began with the US-led invasion in 2001.
This comes as US President Donald Trump has ordered the start of withdrawing some 7,000 troops from Afghanistan, about half of the total number of American boots on the ground in the war-torn country.
The Taliban have warned the US that it would face the same fate as the Soviet Union in the 1980s if it did not leave Afghanistan.