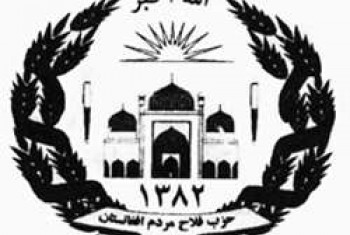 After confirmation of political parties’ law in Afghanistan, Mohammad Zarif Akhond Zadeh set up and registered Salvation party of Afghanistan people, which is defined in its statute as follows: “Salvation Party is a political organization founded on Islamic and democracy principles and rules, supporting independence, national sovereignty, territorial integrity, social justice, and presidency system in the structure of the government. The party is struggling for organizing all Muslims and active members of the country including men and women for the purpose of reconstruction, development, and ensuring stable peace in the country as well as raising up the level of people’s knowledge. It is the principle obligation of the party serve for realization of guidance of Islam among society members and freedom of holding religious ceremonies by followers of all Islamic religions is respected by the party. Campaign against terrorism, giving horrors, production, and import and smuggling narcotic drugs, the party is looking for establishing a secure atmosphere for living in the cities and villages of the country.”
Politically, the content of the party’s statute deals with some issues such as acting according to Islamic rules and religious guidance in any aspects of life, a central government on the basis of democracy and presidency system, social justice, ensuring nations rights, equality of men and women’s rights, campaign with terrorism, and narcotic drugs, free election, multi-national government on the basis of eligibility, supporting International Security Assistance Forces in all provinces up to the establishment of a widespread peace and security all over Afghanistan, friendly relationships with neighboring countries and other nations, obedience of universal human rights declaration, and other international treaties.
Economically, Salvation party is in favor of free market and socially their objectives include civil society, speech and press freedom, eradication of illiteracy, protecting women’s rights and their participation in life issues according to Islamic laws.
Organizational structure of the party include public council, central council, central inspection and supervision committees and executive council with six heads, namely, the head of organization, financial, cultural, cooperation with international organizations and NGOs, women, youth heads.
Mohammad Zarif Akhond Zadeh, leader of Salvation Party, son of Mohammad Anvar was born in Guzar Babeh Qanbar in Mazar Sharif in 1342, graduated from Paida Kazi institute in 1370, being a teacher in education department of Balkh University in 1374. According to his writing, he served his holy military service un the flag of Communist Regime in 1365. By; Sayed Mohammad Baqer Mesbahzadeh
Story Code: 87824
Short url: http://www.payam-aftab.com/vdcayana.49n0u1gtk4.html
Reporter : Sayed Mohammad Bagher Mesbahzadah
Salvation Party of Afghanistan People- Hezb-e-Fallah Mardom Afghanistan
Islamic party of Afghans\' Homeland –Hezb-e- Eslami Watan Afghan
Islamic Unity Party of Afghanistan - Hezbe Wahdat Eslami Afghanistan
Islamic Unity Party of Afghanistan - Hezbe Wahdat Eslami Afghanistan
Afghanistan Solidarity Party (Hezbe Hambastagi Afghanistan)
Copyright© Payam-aftab.com, all rights reserved