China did not recognize the Taliban government that governed Afghanistan from 1996 to 2001, ended official relations and closed its embassy in Kabul.
Date of Publication : Sunday 6 January 2019 09:37 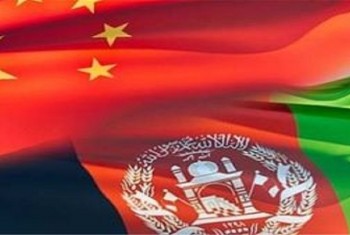 China's role in Afghanistan has grown rapidly after the withdrawal of US troops in 2014. Beijing has been instrumental in facilitating talks between the Afghan government and the Taliban. China is in a strong position in the region and has a reputation in Afghanistan with strong regional political influence to bring feuding parties to the talks table.
As a mediator, China can play a pivotal role in Afghan peace talks as the two countries have close ties throughout history.
Historian Arnold Toynbee describes the region where Afghanistan is located as a "roundabout of the ancient world". The Silk Road, an ancient network of trade routes that connected Asia and Europe, was established during the Han Dynasty of China, and linked the regions for commerce between 130 BC and 1453AD.
At the time, China was the center of Asian trade while Afghanistan played an important role as a key transit trade route between the two continents.
Diplomatic relations between China and Afghanistan were established during the Cold War when Chinese Premier Zhou Enlai visited Afghanistan in 1957. The same year then Afghan prime minister Mohammed Daoud Khan visited China. These visits strengthened bilateral ties. The Sino-Afghan Treaty of Friendship and Non-Aggression was signed in August, 1960.
China never had political or ideological conflicts with Afghanistan and always respected its independence. It opposed foreign interference in Afghanistan during the Cold War and supported the US and other alliance partners when USSR invaded Afghanistan.
China did not recognize the Taliban government that governed Afghanistan from 1996 to 2001, ended official relations and closed its embassy in Kabul. It re-established formal diplomatic ties in late 2001 soon after the collapse of the Taliban regime, and then Afghan president Hamid Karzai visited China for the first time.
China's role as a facilitator will be acceptable to the government and the Taliban because it has always seen Afghanistan as a partner country.
China is Pakistan's close friend. Its diplomatic role can convince Islamabad and help bring the Taliban to the negotiating table.
A stable Afghanistan is also inevitable for China's security and economy. Unrest in Afghanistan is a threat to the entire region and China cannot afford such instability in its neighborhood. It ought to engage in Afghanistan for its own national and economic stability.
Instability in Afghanistan has a direct impact on the security of China's western provinces, especially Xinjiang. The East Turkestan Islamic Movement (ETIM), which seeks independence for Xinjiang, is believed to be running training camps in the Wakhan Corridor and entering Xinjiang through Afghanistan's Wakhan to radicalize Uyghurs Muslims or stage attacks in China.
The ETIM, which is also linked to the Taliban, is a vital threat to China's security. If the Taliban regains power, it will exacerbate the situation in Xinjiang.
Currently, China is the second largest economy and is in the forefront of industry, which needs huge natural reserves to sustain growth. China's resources are inadequate to meet the requirements of industry. Therefore, it needs stability in Afghanistan so that Chinese companies operating in Afghanistan are not hurt. Afghanistan has enormous natural resources but doesn't have the capability to extract them.
Afghanistan has the largest unexplored reserves of copper, coal, iron, gas, cobalt, mercury, gold, lithium and thorium, estimated to be more than $1 trillion. A Chinese firm is operating the Aynak copper mine in Afghanistan since 2007.
Currently, China is Afghanistan's biggest investor. During 2002-13, China gave $240 million in aid to Afghanistan. In 2014, it gave $80 million in aid and promised an additional $240 million over the next three years. In September 2017, China extended $90 million for development projects in Afghanistan's Badakhshan Province.
Afghanistan needs China's economic, financial and technical resources and its political influence at the global stage to get the support of other countries for peace talks.
China's Belt and Road initiative includes the building of highways and railways to better connect South Asia, Central Asia, and the Middle East. Afghanistan is the geographical hub among these regions and only a peaceful Afghanistan can help China connect the regions.
In December 2017, China announced that it is willing to extend the China-Pakistan Economic Corridor to Afghanistan but did not provide details. Its extension to war-torn areas of Afghanistan will not be feasible. That is why China first wants to resolve the conflict in Afghanistan.
Story Code: 87428
Short url: http://www.payam-aftab.com/vdcaayna.49n0u1gtk4.html
Source : Global Times
Reporter : Hafizullah Rajabi
China-Afghanistan-Pakistan dialogue stresses connectivity for regional development
China`s growing friendship with Afghanistan may upset Pakistan
China to pick Afghan Taliban as political force
Peace process should be led by Afghans
China’s surreptitious advance in Afghanistan
Copyright© Payam-aftab.com, all rights reserved