Trump on Afghanistan: The soviets were right to invade 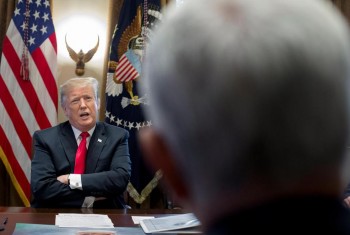 “The reason Russia was in Afghanistan was because terrorists were going into Russia. They were right to be there,” Mr Trump said in his first cabinet meeting of the year - seemingly unaware the US was the main international backer of the other side of the conflict to Moscow.
The US and its allies funded and armed the Afghanistan's mujahideen, a grouping of local anti-communist militias and foreign fighters.
Experts have since noted that unlike Mr Trump’s claim, there were never any reports of terrorist attacks on Russia during the 1980s. Not even the “most shameless Soviet propagandist” claimed that Afghan terrorists were attacking Russia, New York University Afghanistan expert Barnett Rubin told The Washington Post.
During his bizarre speech, President Trump also connected the fall of the Soviet Union in 1991 to Moscow’s role in Afghanistan. Russia, he said, used to be the Soviet Union, “Afghanistan made it Russia. Because they went bankrupt fighting in Afghanistan.”
He may have been confusing the Soviet Union's 1979 invasion of Afghanistan, which led to the deaths of between 500,000 and 2 million civilians, with the second Chechen War in 1999 which was preceded by what Moscow called terrorist and criminal activity by Chechnian separatists in Russia.