US president laughs at Indian-funded library in Afghanistan

US President Donald Trump on Wednesday laughed at Indian Prime Minister Narendra Modi for funding a library in Afghanistan, suggesting it was of no use.
Date of Publication : Thursday 3 January 2019 11:15 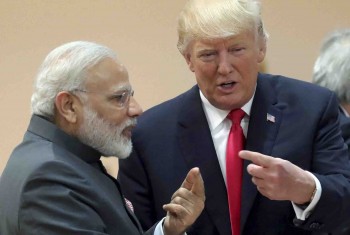 “I get along very well with Prime Minister Modi. But he is constantly telling me he has built a library in Afghanistan. Library! That's like five hours of what we spend (in Afghanistan),” he told reporters after a cabinet meeting.
“He is very smart. We are supposed to say, oh thank you for the library. Don't know who's using it (the library) in Afghanistan. But it’s one of those things. I don't like being taken advantage of,” the president added.
Other countries, for a long period of time, had contributed some soldiers to the US mission in Afghanistan and then talked about it like it was the end of the world, the US leader added.
“And we are subsidizing their military is by billions and billions and billions of dollars, many, many, many times, what those soldiers costs that country,” Trump remarked.
When specifically asked if India’s role in Afghanistan was going to be security-related, he did not give a direct answer. “We are going to be doing something that is right. We are talking to the Taliban. We are talking to a lot of different people.”
India has committed $3 billion in assistance to Afghanistan since US-led forces overthrew the Taliban regime after the September 11, 2001 attacks.
Story Code: 87361
Source : Pajhwok
Reporter : Hafizullah Rajabi
Afghanistan: Geopolitical Situation Revisited
India`s congress leader Ahmed Patel: India doesn't need sermons from US on Afghanistan
Second Afghanistan-India international trade and invest show kicks off in Mumbai
Afghanistan seeks Indian investment to boost its agri sector
India should keep close eye on Kabul as General Raziq's death gives ISI crucial role in stabilising Afghanistan
Copyright© Payam-aftab.com, all rights reserved