By appointing Amrullah Saleh and Asadullah Khalid as acting interior and acting defense minister, the government brings onboard two of the most notoriously experienced anti-Taliban figures.
Date of Publication : Wednesday 2 January 2019 11:20 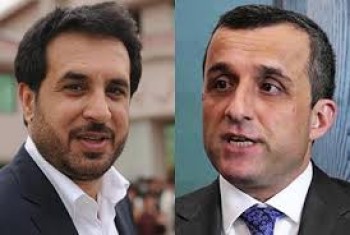 Afghanistan’s President Mohammad Ashraf Ghani announced the appointment of two new security ministers. The decision comes at a time that Donald J. Trump ordered the pull-out of almost half of the 14,000 U.S. soldiers in the country. Whatever the reason for Trump’s withdrawal, it seems that Kabul has taken stock of the current security and political situation in the country.
By appointing Amrullah Saleh and Asadullah Khalid as acting interior and acting defense minister, the government brings onboard two of the most notoriously experienced anti-Taliban figures.
Saleh brings to the table experience and valuable insight into the nature and hideouts of terrorist groups. Between 2004 and 2010, he was the head of Afghanistan’s intelligence service. He is the one that pinpointed the Pakistani town of Manshera, near to U.S. special forces killed Osama bin Laden in 2011. Saleh is a valuable asset for the government and a workable partner for international allies.
His appointment, however, is surprising. Saleh is a vocal and fearless critic of Ghani’s monopolistic and exploitive policies in domestic affairs and his appeasement policy towards the Taliban.
Saleh’s appointment may be undesirable for Ghani, but given the complexity and fragilityAfghanistan finds itself in, it is understandable why figures like Saleh and Khalid are named to key security posts. They both have the will and experience to fight the Taliban and bring security to Afghanistan’s big cities.

Upcoming Elections
This is crucial in light of the forthcoming presidential elections. Afghanistan held parliamentary elections two months ago, and in the run-up to the polls, ten candidates were killed. The vote in the Kandahar province was delayed by a week after the Taliban assassinated a local police chief, while explosions targeted several other polling stations across the country.
As Afghanistan is getting closer to the presidential elections, former National Security Advisor to Ghani Hanif Atmar announced he will run for the presidency. Ghani’s team saw both of the replaced ministers as Atmar’s loyalists, making their dismissal foreseeable and inevitable.
In addition to the withdrawal of U.S. troops and upcoming elections, the refusal of the Taliban to hold direct talks with Kabul also contributed to the government’s decision of bringing changes in key security posts.
The appointment came after the Taliban echoed their refusal to meet with representatives of the Afghan government in the United Arab Emirates. Kabul reciprocated the humiliation it had received from the Taliban and its backers in UAE by bringing the anti-Taliban Saleh and Khalid onboard.

Has Ghani Isolated Himself?
Ghani has been conducting ethno-politics under the guise of “fighting” warlordism. He has been successful to some extent in marginalizing political opponents, silencing critics, and dismissing officials who did not obey his command.
However, now it appears that Ghani has isolated himself. A few months back it would have been unthinkable for Ghani to appoint not one but two of his own critics and vocal anti-Taliban political figures. Maybe Ghani has realized that the appeasement policy towards the Taliban – which has many critics inside the government – is not the right approach.
The possibility of an interim government agreed behind closed doors between the U.S., Taliban, and Pakistan might have frightened Ghani. In such a scenario, not only the government’s leadership would see themselves out of power in a blink of an eye, but Ghani’s “Pashtun base” would also be threatened by the Ghilzai-lead Taliban.

Challenges and Opportunities
The upcoming year will be crucial for Afghanistan, as the country will be heading for presidential elections.
Rising insecurity, political instability, corruption, upcoming elections, and peace with the Talibanare the major issues the government is facing. In a bid to address some of these security issues, Ghani appointed the two new competent security ministers.
This move may not be enough to address all the problems, but at a time of increasingly deteriorating security in which the government is losing territory to the Taliban, figures like Saleh and Khalid will bring hope and could provide a morale boost for the Afghanistan National Defense Security Forces (ANDSF) in the face of departing U.S. troops.
Afghanistan’s government and international allies, especially the U.S., should fully support the new appointees so that both ministries can become successful in their mission of providing security to the people of Afghanistan and make a smooth election possible.
Story Code: 87320
Short url: http://www.payam-aftab.com/vdcbgfbw.rhbz5pe4ur.html
Source : The Globe Post
Atmar, Saleh Resignation "Disaster": Report
Khaled Mashaal
President Ghani Meets Abu Dhabi Crown Prince
Heading high-level delegation, Ghani in Nangarhar
Ghani: Afghan forces not to accept transient peace
Copyright© Payam-aftab.com, all rights reserved