Chief Executive Dr. Abdullah Abdullah asked the Taliban to end calamities, the people of Afghanistan had been facing since 1979 and said time for the entire Afghans to help push for peace in the country.
Date of Publication : Saturday 29 December 2018 14:05 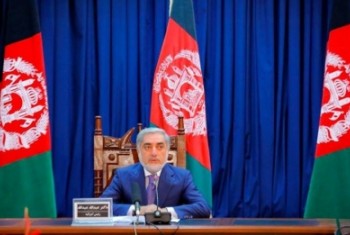 Addressing a gathering in Kabul to condemn Jadi 6th, former Soviet Invasion of Afghanistan, the CE said that Afghanistan has raised its voice for peace and removed all hurdles in this regard and that it was now up to the Taliban to either continue the misfortunes, still facing the Afghans or bring them to an end after 39 years.
“The legacy of the Soviet Invasion continued to haunt the Afghans after decades,” said the CE remembering the Afghan Mujahedeen to have confronted and invaders barehanded and that their resistance not only forced them to withdraw, but also disintegrated the union. He said the invasion destroyed the country and forced millions of people to flee homes and migrate abroad, including the neighboring countries.
“After 39 years, we are still struggling to recover from the damage and see a stable and prosperous Afghanistan.” Touching on issue related to the Taliban, he said their rejection of peace talks with the government meant they wanted to keep continue the misfortunes and that Afghanistan had raised it voice for peace and had removed all hurdles in this regard, but not it was up to the Taliban weather to continue the misfortunes or put them to an end. He asked the Taliban to stop violence and destructive activities and instead join rebuilding their homeland along with their countrymen. The Ce said the Afghan forces were to defeat terrorist groups which wanted to continue the conflict. “The time has come now that all Afghans should gather around a single platform and jointly push for an end to the war,” said the CE.
Story Code: 87152
Short url: http://www.payam-aftab.com/vdcewz8v.jh8fnik1bj.html
Reporter : Hafizullah Rajabi
​Taliban to take part in ‘intra-Afghan’ talks in Moscow
​Afghan forces kill 21 Taliban, 10 Daesh militants in Faryab and Badghis
Taliban dismiss meeting Afghan govt delegation for talks in January
Taliban insists talks with US focused on foreign troop withdrawal
Copyright© Payam-aftab.com, all rights reserved