​3 questions: What will US troop cuts in Afghanistan mean?

Drawdown adds to complexity of difficult situation and to woes of civilians caught in conflict for 40 years.
Date of Publication : Monday 24 December 2018 12:52 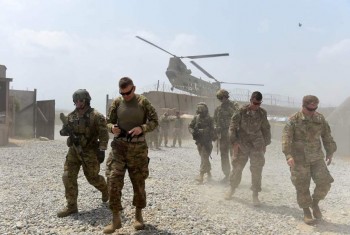 The 17-year-old U.S. war in Afghanistan took a new turn last week when President Donald Trump ordered the withdrawal of 7,000 American troops from the country.
Trump has long questioned the utility of U.S. involvement in Afghanistan, seeing it as a wasteful expense — and a conflict without a clear victory strategy. The White House decision was followed by the resignation of Defense Secretary Jim Mattis, who had pushed for continued U.S. engagement in Afghanistan.

Here are three questions about how the troop drawdown may affect the situation in Afghanistan.

1. What happens now to the peace talks with the Afghan Taliban?
The drawdown risks undermining the nascent peace process between the United States and the Afghan Taliban, ultimately making it more difficult for the U.S. government to leave the country on its terms. In 2018, U.S. diplomats worked to persuade the Afghan Taliban to come to the negotiating table. For much of the year, the Afghan Taliban remained unwilling to talk.
Scholars of civil war suggest that rebels prefer fighting over negotiations when external state support and illicit economies make them confident of their military prospects — criteria which the Taliban meet. This past week, the Taliban came around to some preliminary talks but refused to speak to the Afghan government.
The Taliban’s long-held strategy has been to erode the U.S. government’s resolve to stay in Afghanistan. Even with 14,000 American troops fighting alongside Afghan security forces, the Taliban inflicted sustained losses on Afghan forces, retaining control of large parts of the country and challenging key urban centers.

With only half as many U.S. troops remaining in the country, the Afghan Taliban may press home their advantage by accelerating the pace of attacks. The reduction in force level could now give the Taliban confidence that their strategy is working and that a full withdrawal of U.S. forces is a reasonable expectation.
The drawdown, in fact, might have been a potential U.S. bargaining chip on the negotiating table with the Afghan Taliban. But the White House decision was out of sync with the negotiations. It appears to have undercut the U.S. diplomat leading the negotiations with the Taliban, Zalmay Khalilzad, who was trying to signal that “American commitment was firm.”

2. Will Afghanistan see domestic political realignment and renewed danger of a civil war?
The U.S. drawdown risks triggering serious domestic political realignments in Afghanistan, destabilizing the political structure underlying the U.S.-backed regime. Senior Afghan journalist Sami Yousafzai observes that Afghan political elites are comparing the modern period to the chaos following the 1989 Soviet withdrawal from Afghanistan. Back then, the government of Prime Minister Mohammad Najibullah, after losing its great power patron, rapidly lost ground as warlords and armed groups wrestled for control.
Those memories, combined with the state of the Taliban insurgency, may prompt domestic players to prepare for the worst-case scenario — a multiparty civil war. Some leaders may mobilize their ethnic bases of support while stepping up the process of arming themselves. Others may reach out to their foreign patrons and seek direct material support. These political realignments may increase the already high rate of defections from rank-and-file Afghan security forces.
Such realignments pose a threat to the faltering coalition of President Ashraf Ghani, who announced he will seek re-election in the April presidential election. The worsening security situation combined with elite squabbling may make an election more improbable.

3. And will terrorist groups, including al-Qaida, stand to gain?
The drawdown can help Afghanistan-based terrorist groups intent on attacking the United States, specifically al-Qaida. In 2015, battered by the U.S. drone war in Pakistan, al-Qaida revived some operations in Afghanistan, using its South Asia franchise, al-Qaida in the Indian subcontinent.
The U.S. government claims al-Qaida’s strength in Afghanistan remains checked. My field research, however, suggests that al-Qaida still has a serious skeleton capability in the region, specifically in eastern provinces like Paktika, which it is actively trying to rebuild.
Reduction of U.S. forces is likely to ease existing military pressures on al-Qaida — and give it more space to rebuild for local and external operations. Al-Qaida may be able to allocate more resources in support of the Afghan Taliban’s military campaign. And it may be able to better marshal the capability needed for a major international terrorism operation.
The pressure on al-Qaida might be sustained if Afghan intelligence agencies can substitute for the U.S. intelligence infrastructure that will fold with the drawdown. A surge in offshore U.S. capabilities, like aerial surveillance and communication interception, and armed striking platforms such as drones could enable the U.S. government to manage al-Qaida’s threat.
But Afghan intelligence suffers from defections and rampant corruption, and has struggled to provide high-quality support to the U.S. government. In addition, any meaningful increase in aerial and communication surveillance across Afghanistan will be costly. These expenditures may not be a priority in a White House with a stated goal of reducing U.S. military deployment expenses.
That doesn’t mean al-Qaida will be able to mount a major attack in the United States. Even with a robust external operations infrastructure, al-Qaida will struggle to execute an attack inside the United States because of the layers of U.S. counterterrorism vigilance. However, the availability of a relatively conducive safe haven in Afghanistan can improve al-Qaida’s ability to train recruits and plot the group’s next moves.
The situation in Afghanistan was grim as is. The unexpected drawdown adds to the complexity of a difficult situation. And it adds to the woes of Afghan civilians who have been caught up in the web of internal conflict for four decades.
Story Code: 87005
Short url: http://www.payam-aftab.com/vdcbsgbw.rhbzgpe4ur.html
Source : Mercury News
Reporter : Hafizullah Rajabi
Copyright© Payam-aftab.com, all rights reserved