Gen. Dunford: US should stay in Afghanistan or face another 9/11

The United States should continue its military presence in Afghanistan if it wishes to prevent future attacks similar to what happened on September 11, 2001, the top US military officer has warned.
Date of Publication : Saturday 8 December 2018 09:31 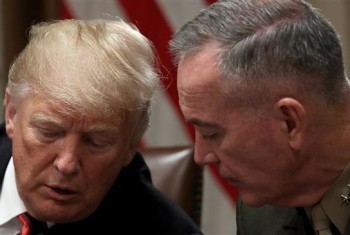 Speaking at an event organized by the Washington Post on Thursday, Chairman of the Joint Chiefs General Joseph Dunford said pulling American and NATO forces out of Afghanistan was not a good idea.
"Leaving Afghanistan in my judgment would give the terrorist groups the space with which to conduct operations against the American homeland and its allies," Dunford said.
"It is our assessment that in a period of time… [the terror groups] would have in the future the capability to do what they did on 9/11," he said.
Almost 3,000 people were killed on September 11, 2001 when 19 hijackers – 15 of them Saudis -- with alleged ties to al-Qaeda terrorist group flew two passenger aircraft into the Twin Towers of the World Trade Center in New York City and a third plane into the Pentagon building in northern Virginia.
Following the attacks, the United States – under then President George W. Bush’s -- and its allies invaded Afghanistan on October 7, 2001 as part of a so-called war on terror.
After more than 17 years, however, the foreign troops are still in the country because the operation has failed to defeat Taliban militants.