Khalilzad briefs Ghani on his recent trips regarding Afghan peace 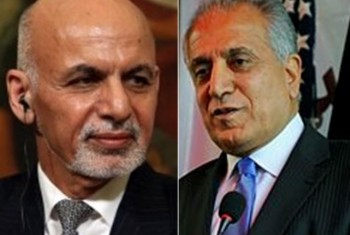 The Office of the President, ARG Palace, in a statement said President Ghani met with the U.S. envoy for Afghan peace Ambassador Zalmay Khalilzad today.
The statement further added that the Chief Executive of the Unit Government Abdullah Abdullah was also present in the meeting.
According to ARG Palace, Ambassador Khalilzad President Ghani on his recent trips to the region as well as the trips planned for the future.
No further details have been in this regard but the statement added that President Ghani hailed Ambassador Khalilzad for his efforts and said the government has announced negotiating team in Geneva conference, emphasizing that the government is committed to start peace talks.
President Ghani also added that joint efforts would help in achieving a dignified and lasting peace in Afghanistan.
Story Code: 86548
Short url: http://www.payam-aftab.com/vdcc4pq4.2bqe08y-a2.html
Source : ARG
Reporter : Hafizullah Rajabi
Khalilzad to visit Afghanistan and 7 other countries in support of Afghan peace
​Khalilzad in China for talks on Afghan peace process
Khalilzad meets with Ghani on first leg of regional visit
Khalilzad leads delegation to Afghanistan and Pakistan
Khalilzad become US Adviser on Afghanistan
Copyright© Payam-aftab.com, all rights reserved