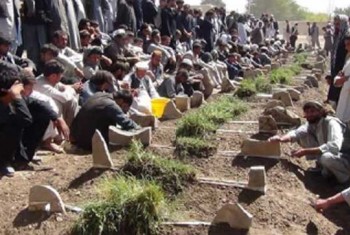 On November 28, 2018, at least 10 people were killed and another 29 injured in a suicide attack in Kabul City (District), the national capital.
On November 23, 2018, at least 10 soldiers of the 2nd Regiment of the Afghan National Army (ANA) were killed in a suicide attack that targeted soldiers inside a mosque at their base in the Mandozai District of Khost Province. Another 15 soldiers were injured in the explosion.
On November 20, 2018, at least 55 people were killed and 94 injured in a suicide bombing conducted inside the Uranus Wedding Hall in Kabul City.
According to partial data compiled by the South Asia Terrorism Portal (SATP), at least 822 people have died in 64 suicide attacks across Afghanistan in the current year (data till November 30, 2018). There were 613 fatalities in 52 such attacks through 2017; and 503 fatalities in 43 incidents in 2016.
According to the Protection of Civilians in Armed Conflict: Annual Report 2017 2017 had already recorded the highest number of civilian casualties (both in terms of deaths and injuries separately) caused by suicide attacks in Afghanistan since 2009, when United Nations Assistance Mission’s (UNAMA) started documenting civilian fatalities in Afghanistan. According to the report, there were 2,295 civilian casualties (605 deaths and 1,690 injuries) due to suicide attacks in 2017. The previous highest of number of deaths (488) was recorded in 2011, while previous highest of injuries (1,565) were reported in 2016.
Casualties in suicide attacks have been on the rise since 2009, with the exception of years 2010, 2012, and 2013. According to latest quarterly report by Protection of Civilians in Armed Conflict released on October 10, 2018, between January 1, 2018, and September 30, 2018, there have been 2,243 civilian casualties (714 deaths and 1,629 injuries) in suicide attacks.
Significantly, as SAIR noted earlier, despite 30 years of warfare, Afghanistan had never experienced a suicide attack until September 9, 2001, when the Northern Alliance Commander Ahmad Shah Masood was assassinated at Khwaja Bahauddin in Takhar Province by two Arab al Qaeda suicide bombers. With this event, Afghanistan was thrust into a new chapter of armed conflict.
According to partial data compiled by the Institute for Conflict Management (ICM) from media reports, Afghanistan witnessed 421 incidents of suicide attacks between September 9, 2001, and December 31, 2008, resulting in 1,231 fatalities. Thereafter, between January 1, 2009, and September 30, 2018, UNAMA has recorded more than 654 suicide attacks resulting in 14,248 casualties 3,274 deaths and 10,974 injuries). [No. of suicide attacks for year 2009 and 2018 is not available]
Neighbouring Pakistan, which is primarily responsible for the consistently deteriorating security scenario in Afghanistan, remains the principal source of the continuing menace of suicide attacks. According to a report titled Suicide Attacks in Afghanistan (2001-2007) released by UNAMA on September 1, 2007,
The evidence of involvement continues to crop up. Referring to a spate of suicide attacks in January 2018 Mohammad Stanekzai, the head of Afghanistan’s spy agency, National Directorate of Security (NDS) on February 1, 2018, categorically stated on February 1, 2018, “We asked Pakistan to hand over the culprits of the attacks in Afghanistan and we shared undeniable evidence that the attacks were planned there”. More recently, on October 23, 2018, President Ashraf Ghani observed, “I want to say that this conspiracy was plotted in Pakistan. So Pakistan should give us the criminals so that we can bring them to justice.” He was referring to the killing of Kandahar Police Commander Gen. Abdul Raziq in Kandahar City (District), the capital of Kandahar Province, on October 18, 2018.
The principal architect of the initial upsurge of suicide attacks was senior Taliban ‘commander’ Mullah Dadullah aka Dadullah Akhund, who targeted Afghan and Western troops in Southern Afghanistan. Though Dadullah was killed in a raid by International Security Assistance Force troops in Kandahar City on May 12, 2007, the trend of suicide bombings continues to terrorise Afghanistan. The Taliban remains the primary player. According to UNAMA’s latest quarterly report released on October 10, 2018,
There were a total of 2,798 deaths in Afghanistan during this period.
It has long been established that Taliban’s survival primarily depends on Pakistan’s continuing support and provision of safe havens. Indeed, Mullah Rahmatullah Kakazada, a senior diplomat under the Taliban regime, according to a November 29, 2016, report, had categorically stated, “If we left Pakistan we would not survive one week”. He was responding to a report that said Syed Mohammad Tayyab Agha, the former head of the Taliban’s Qatar office, in letter to Mullah Akhundzada had said, “to be able to make independent decisions, you, the members of our leadership council, and heads of our various commissions, should leave Pakistan.” Way back in 2010, one of the Taliban’s southern ‘commanders’ (name not disclosed) in an interview had stated,
No respite from suicide bombings in particular and terror attacks at large inside Afghanistan is likely in the foreseeable future, as there is no evidence on the ground to suggest that Pakistan is going to give up its policy of exporting terror into its neighbourhood. On the contrary, with Imran Khan assuming the office of Prime Minister in August 2018, there is a high probability of the Taliban gaining more support from Islamabad. Khan has strong links with the Afghan Taliban, and a close relationship with the Pakistan Army, and there is likely to be a complete unity of purpose on Islamabad’s strategy of disruption in Afghanistan.
Story Code: 86479
Source : ٰThe Eur Asia Review
Reporter : Hafizullah Rajabi
Afghanistan: prospects of a political settlement with the Taliban
Afghanistan, Turkmenistan signed strategic cooperation agreement
Hekmatyar: NUG and foreign forcesm causes of continued war in Afghanistan
NATO heads of state to meet in London this year
Which Afghan politicians invited to Moscow meeting with Taliban?
Copyright© Payam-aftab.com, all rights reserved