The US military strategy in Afghanistan has failed to achieve any victories and has made the war-torn country the “graveyard” of US troops, as it had become for previous empires, says an American political analyst.
Date of Publication : Thursday 29 November 2018 11:45 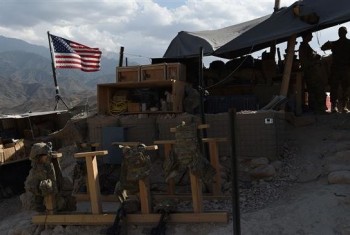 “We’re seeing the United States go down the path of other great powers or once great powers such as Great Britain,” said Rodney Martin, a former congressional staffer based in Los Angeles.
“Afghanistan was the graveyard of Great Britain; it was the graveyard of the Soviet Union and now it is beginning to be the graveyard of the United States,” Martin told Press TV on Wednesday.
“The United States did not learn from Great Britain or the Soviet Union,” he added.
Afghanistan has long been called the “graveyard of empires” — for so long that it is unclear who coined that term. In the past two centuries, both Soviet and British invaders have been forced to make bloody retreats from Afghanistan, deprived of victories that, on paper, looked easy, but ultimately proved futile.
Last year, the Taliban militant group warned the US that they would make Afghanistan the " 21st-century graveyard for the American empire" after President Donald Trump's announcement that he would commit more troops to the country.
“The people of Afghanistan understand that the United States created a malign group with the Taliban originally, just like it created ISIS as well,” Martin said, referring to the terrorist organization also known as ISIL or Daesh.
At least three US soldiers have been killed and three others wounded in a bomb attack in the central Afghan city of Ghazni.
Three US servicemen were killed and three others wounded on Tuesday when an improvised explosive device went off in central Afghanistan. A US civilian contractor had also been injured in the blast.
The deaths are the latest in an increasing toll on the American forces in Afghanistan.
On Saturday, a US army soldier was shot dead following a purported operation against the Takfiri al-Qaeda terrorist group in the southwestern province of Nimruz. The NATO mission in the country said in a statement that the trooper was accidentally killed by a member of Afghan partner forces.
A recent report showed that the US forces were losing ground to Taliban militant group despite their 17 years of presence in the militancy-infested country.
According to the iCasualties website, 3,555 US-led troops, including 2,414 American soldiers, have been killed since the onset of the aggression on Afghanistan some 17 years ago, following the 9/11 terror attacks.
Over 8,000 people lost their lives or were wounded in Afghanistan between January and September this year, with the country on track to be deadlier than Syria in 2018.
The US, along with a number of fellow-NATO members, invaded Afghanistan in 2001, toppling a Taliban regime in control of most of the country at the time, but it has failed to restore security in the country plagued by militancy and terrorism.
Last year, Washington added thousands of additional troops to its forces in Afghanistan. The White House claims the American troops are deployed in Afghanistan to train Afghan forces and conduct counterterrorism missions against militant groups.
Story Code: 86349
Short url: http://www.payam-aftab.com/vdcb9fbw.rhb0ape4ur.html
Source : Press TV
Reporter : Hafizullah Rajabi
Afghanistan war unwinnable!
US drops record number of bombs on insurgents in Afghanistan
‌Assessment: U.S. making little progress in Afghanistan as Taliban, ISIS remain active
Mattis: Privatizing Afghanistan war not a wise idea
American deaths in Afghanistan war reach 500