The situation in Afghanistan stagnated and may even have deteriorated during the second half of 2018, despite U.S. military leaders and diplomats insisting that progress is being made.
Date of Publication : Tuesday 20 November 2018 11:50 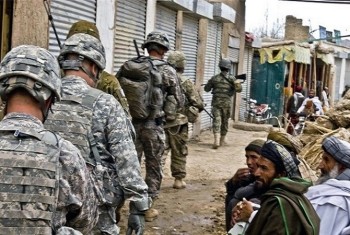 That’s the assessment not of some international critics of the U.S., but of watchdog offices from the Pentagon, State Department and the U.S. Agency for International Development.
In its quarterly report of the U.S.-led war against terrorism in Afghanistan, the Pentagon’s independent inspector general said few gains were made between July 1 and Sept. 30, 2018 despite the U.S. increasing strikes against the Taliban, expanding training for Afghan forces and pressuring Pakistan to act against terrorist safe havens.
“In public statements, diplomatic and military leaders emphasized that progress towards the goals of the South Asia strategy is being made,” the report stated. “However, available measures of security in Afghanistan, including total security incidents, population control, and civilian casualties, showed little change.”
Civilian casualties and casualties among Afghan security forces were higher than they were during the same time last year, the report pointed out.
Furthermore, ISIS-K — the Islamic State’s Khorasan Province branch, active in Afghanistan and Pakistan — has continued to mount deadly attacks.
These findings contrast with assertions by some U.S. officials that President Donald Trump’s Afghan war strategy — which was announced more than a year ago — is working.
On the other hand, the findings are in line with comments made last weekend by Gen. Joseph Dunford, chairman of the Joint Chiefs of Staff, who said the battle against the Taliban is still in a stalemate.
The Taliban “are not losing” in Afghanistan, Gen. Dunford, the top U.S. military officer, told a security forum last week.
“We used the term stalemate a year ago and, relatively speaking, it has not changed much,” he said.
On Monday, the Taliban said that a three-day meeting with the U.S. special envoy to Afghanistan had ended without an agreement for a peace deal.
Envoy Zalmay Khalilzad declared a deadline of April 2019 to end the 17-year-long war, but Taliban leaders said they hadn’t accepted any deadline.
A senior member of the Taliban said Khalilzad’s move to declare a deadline showed that the U.S. was desperate to withdraw troops from the country.
The Taliban have strengthened their grip over the past three years, with the government in Kabul controlling just 56 per cent of Afghanistan, down from 72 per cent in 2015, a U.S. government report showed this month.
The Pentagon inspector general’s report pointed out that only 65 per cent of the Afghan population lived in government-controlled and government-influenced areas, “a figure that has not changed in the past year.”
Indeed, the number of civilians killed in Afghanistan in 2018 is on track to rank among the highest since 2001.
Over 36 people were killed in various attacks last month as Afghans went to the polls for the country’s first parliamentary elections in eight years.
ISIS-K claimed responsibility for a suicide attack that left four people dead last week. A few days later, Taliban insurgents slaughtered at least 30 Afghan forces.
Meanwhile, the U.S., which has some 14,000 troops in Afghanistan, continues to seek an exit strategy.