The participants of the 4th China-Afghanistan-Pakistan Trilateral Dialogue have vowed to enhance connectivity among the three neighbors for peace, stability and economic development in the region.
Date of Publication : Tuesday 13 November 2018 09:27 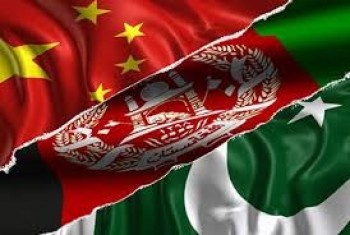 Chairman of Pakistan Senate's Foreign Affairs Committee Mushahid Hussain, who inaugurated the dialogue on Monday, said China, Pakistan and Afghanistan should increase cooperation on multiple fronts for peace, stability and development.
The senator, who is also the chairman of the Pakistan-China Institute, said, "Realizing the importance of the trilateral relationship between China, Pakistan and Afghanistan, especially in light of the China-Pakistan Economic Corridor (CPEC), we have organized the trilateral dialogue between the three countries."
Hussain said Pakistan's position has become vital with the successful implementation of CPEC which has been changing its infrastructural landscape massively.
"Our future is intertwined through cooperation, corridors and connectivity. CPEC is not only offering connectivity for China and Pakistan, but it is for the whole region. I believe it would connect central Asian states with Pakistan's Gwadar port through Afghanistan in future," said the senator.
On the occasion, Chinese Ambassador to Pakistan Yao Jing hailed the trilateral dialogue as a significant and important initiative which can play a positive and conducive role to sort out the regional issues.
"There is a great potential for further development of China's relations with the two important neighbors, Pakistan and Afghanistan," said Yao, adding that both neighbors figure very high in China's advocacy for a community of shared future and that China is playing its role for the social development in the two countries.
Emphasizing peace as the basic foundation of the development, Yao said a political solution is more relevant and appropriate for peace in Afghanistan.
The event also featured participation from key intellectuals from all three countries, who spoke on various topics, including the Belt and Road Initiative and CPEC, and potential for trilateral cooperation and promotion of the cultural connectivity.
Outgoing Afghan Ambassador to Pakistan Omar Zakhilwa expressed that connectivity between China, Pakistan and Afghanistan and Central Asian states is very natural and the connectivity can bring an economic revolution in the region.
"Regional economic cooperation based on connectivity is the only way forward and we should focus on people-to-people connections, cultural exchanges and tourism to make our relations stronger," said the Afghan diplomat.
Highlighting the importance of CPEC and its positive effects on Afghanistan, Zakhilwal stressed on the need of the extension of CPEC to Afghanistan because "the majority of the Afghan regions have potential to be connected with CPEC."