The US Secretary of State, Mike Pompeo, on Tuesday said that Pakistan would be held accountable if they are not sincere in their counter-terrorism efforts.
Date of Publication : Wednesday 24 October 2018 09:11 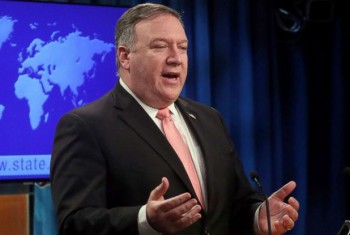 “We had made clear that the U.S. policy with respect to south-central Asia has not changed, that our expectation is that Pakistan will not provide safe harbor to terrorists on their western border,” Pompeo told reporters in response to a Af-Pak question.
“We couldn't make that message any more clear and that Pakistan will be held account if they don't see about it …, if they're not sincere in that effort. We don't believe we can get to the place that everyone wants. Everyone wants reconciliation in Afghanistan, and to achieve that you can't have a safe harbor for Taliban - for Haqqani, and for others inside of Pakistan,” Pompeo said.
“The Pakistani government knows that that's our review and this administration has already made significant efforts to hold them accountable and we hope that they'll achieve the goal that we have out for them,” he said.
Pompeo said that he is encouraged by the high voter turnout in the Afghan parliamentary elections this past weekend.  “We commend the Afghan security and defense forces in their efforts to facilitate credible elections,” he said.
“There were some technical issues, but despite that we remain committed to assisting the election commissions, especially in their work for the presidential election that will come in April of 2019,” Pompeo said.
Story Code: 85273
Short url: http://www.payam-aftab.com/vdcgwx97.ak9nu4j5ra.html
Source : Pajhwok
Reporter : Hafizullah Rajabi
​Pakistan’s Bogeyman in Afghanistan
U.S. Special Adviser for Afghanistan Reconciliation arrives in Islamabad
Trump points the finger at Pakistan again. What does it mean for Afghanistan?
To enhance Afghan reconciliation process, China, Pakistan vow
Iran, Pakistan, And Afghanistan To Meet Monthly
Copyright© Payam-aftab.com, all rights reserved