President Mohammad Ashraf Ghani has said that the ‘enemy propaganda’ would not create barriers on the way of the Afghan people to participate in the elections, emphasizing that the elections would be secured in a proper way.
Date of Publication : Wednesday 10 October 2018 09:15 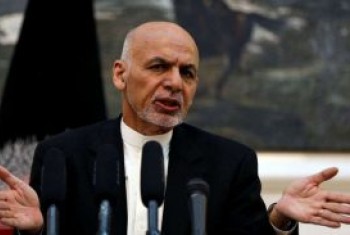 He made the remarks during a meeting of the Commander-in-Chief of the Armed Forces organized in Presidential Palace on Tuesday.
This comes as the Taliban group had earlier warned that the group would carry out attacks against the election targets, claiming that elections are a conspiracy of the West and the U.S.
In the meantime, the Office of the President, ARG Palace, in a statement said the security and defense officials presented their reports regarding the possible threats, security precautions considered for voting centers, and delivery of the electoral materials to the provinces.
President Ghani said elections is a national and democratic process and emphasized that ensuring the security of the elections is vital and that the Afghan armed forces would ensure security during the election campaigns and voting.
Story Code: 84794
Short url: http://www.payam-aftab.com/vdcdo50j.yt0on6me2y.html
Source : KP
Reporter : Hafizullah Rajabi
Afghanistan Election Threatened by More Than the Taliban
UN stresses domestic observers’ role in polls
Opposition raises spectre of fraud even with biometric polls
Candidates trying to buy election observers
Taliban, U.S. Engage in Twitter Spat Amid Rise in Afghanistan Violence
Copyright© Payam-aftab.com, all rights reserved