​Failed States, Anarchy and resilience Of the Taliban in Afghanistan

The US considered the Taliban a stabilizing force to ensure its geostrategic interests by assisting in laying down the alternative Turkmenistan-Afghanistan-Pakistan (TAP) pipeline bypassing Iran and Russia.
Date of Publication : Monday 24 September 2018 10:39 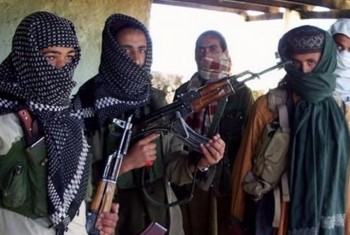 Failed state institutions are byproducts of civil wars when governments undergo legitimacy crises and various dissident groups compete for power and legitimacy leading to absence of law and order in large swathes of territory and particularly the border areas flagrantly lacking governments’ writ are likely to be more infested with radical elements. Anarchy is further compounded by collapse of economy and failure of basic social services like education and health. Rise of a radicalized environment has been conducive to growth of terrorism as evidenced in Iraq and Afghanistan and in a host of African countries like Libya, Somalia and Mali.
Great powers selectively intervene in cases of humanitarian crisis which is largely motivated by their respective geostrategic interests. Rwanda, an African state, was left to its fate for long despite cases of serious human rights violations while Kosovo in Europe quickly attracted the attention of the west. Similarly, it was the 9/11 that propelled the US to intervene in Afghanistan but for long the country was ripped apart by civil war and human rights violations by the fundamentalist Taliban regime.
The US considered the Taliban a stabilizing force to ensure its geostrategic interests by assisting in laying down the alternative Turkmenistan-Afghanistan-Pakistan (TAP) pipeline bypassing Iran and Russia. It was when the Taliban moved away from the American orbit of influence that the US decided to intervene in Afghanistan. Humanitarian concerns very often provided a veneer to real geostrategic interests driving humanitarian interventions. The intervening powers’ lack of interests in post-conflict state-building exercises and failure to address the roots of insurgency in societies divided along sectarian lines keep tensions boiling on which radical religious groups such as the Taliban germinated and spread their tentacles and the wars led by the intervening powers only transformed the rebellion without actually ending them.

Rise and Resilience of the Taliban
Following the Soviet withdrawal from Afghanistan, the US lost interest in Afghanistan (L. P. Goodson, Afghanistan’s Endless War: State Failure, Regional Politics, and the Rise of the Taliban, University of Washington Press, Washington, 2001, p. 147). It was more interested in the Gulf War to set the tone of a New World Order than the crisis- ridden Afghanistan for which the superpowers were largely responsible. In this set up, regional powers like Iran, Pakistan and Uzbekistan began to pursue their interests without being client to any bigger power.
Pakistan, in this period, was deserted by the US with aid being withdrawn and sanctions being imposed for undertaking nuclear programme (Former President of Pakistan Pervez Musharraf writes about the sense of anti-American feelings generated by the US’s abandonment of Pakistan after Soviet Withdrawal. See Pervez Musharraf, In the line of fire: A memoir, fp free press, New York, 2006, p. 222. Also see, Marvin G. Weinbaum, “Pakistan and Afghanistan: The Strategic Relationship”, Asian Survey, Vol. 31, No. 6, June 1991, p.509). Infighting between the various resistance forces in Afghanistan allowed the communists to remain in power till 1992. Mohammad Najibullah was the last communist to step down in favour of a mujahideen coalition led by Sibgatullah Mujadedi.
But the mujahideen coalition could not remain in power for long and was soon ripped apart by brutal factional struggles. An uncertain phase of civil war ensued characterized by fight for personal power bringing most part of Afghanistan under local commanders and warlords. Kabul was seized by the Tajik dominated Jamiat-e-Islami of Barhuddin Rabbani and his commander, Ahmed Shah Massoud. During the civil war, Pakistan rendered all kinds of support to Hekmetyar but he failed to capture power despite repeated attempts and the disastrous toll on the people that he exacted by indiscriminate rocket and artillery barrages. Heavy fighting ensued between different ethnic factions like Tajik dominated Jamiat-e-Islami, Pushtun dominated Hizb-e-Islami, the Hazara dominated Hiz-e-Wahdat and Uzbek dominated Jowzjan militia in the absence of any predominant external power in the region.
The Jamiat-e-Islami (JUI), an Islamic organisation in Pakistan which turned into a political party later, organised the rural madrassahs in the Pashtun tribal areas in Afghanistan and the network of madrassahs in Pakistan, where millions of Afghans took refuge after the communist coup in Afghanistan in 1978. After becoming a political party the JUI remained in political opposition to the governments elected after President Zia’s death in 1988. After the 1993 elections, however, it became a part of coalition government of Benazir Bhutto, and its leader, Fazlur Rehman, played a pivotal role in his advocacy of the Taliban. Bhutto also retained the services of Zia’s appointee as head of the ISI, General Hamid Gul, who favoured a more interventionist role for Pakistan in Afghan affairs.

Post-9/11 and state and nation-building in Afghanistan
To conduct the Afghan War, the American forces confined their activity to a high-technologically driven military role while the International Security Assistance Force (ISAF) mission was portrayed as post-conflict stabilization and reconstruction. Between 2001 and 2005, the US spent eleven times more on military operations in Afghanistan than it did on reconstruction, humanitarian aid, economic assistance and the training of Afghan security forces combined (T. Bird and A. Marshall, Afghanistan: How the West lost its Way, Yale University Press, New Haven, 2011, p. 134). James Dobbins maintained that the inadequate resources especially in Afghanistan “represented both an exaggerated confidence in the efficacy of high-tech warfare” and “an aversion to the whole concept of nation-building” (J. Dobbins, “The Costs of Overreaction”, in Brian Michael Jenkins and John Paul Godges, (eds.), The Long Shadow of 9/11: America’s response to Terrorism, Rand corporation, Pittsburgh, 2011, p. 17).
According to Munoz, the paltry investment of the US resources in Afghanistan was only one reason for the American mission stalling there. Another reason was the way those resources were applied. He argues: “Instead of honoring Afghan terms of peace, utilizing village institutions to maintain security, and training Afghans to do most of their own fighting and rebuilding…, the US and NATO tried to impose Western ways of doing things” (Munoz, “A Long-Overdue Adaptation to the Afghan Environment” in Brian Michael Jenkins and John Paul Godges, (eds.), The Long Shadow of 9/11: America’s response to Terrorism, Rand corporation, Pittsburgh, 2011, pp. 23-24). The US applied a top down approach to ensure security and socio-economic development in Afghanistan. On the security front, this has meant building the Afghan National Security Forces – consisting of the Afghan National Army, Afghan National Army Air Corps, Afghan National Police, and Afghan Border Police – as the bulwarks against the Taliban and other insurgent groups. On the economic and development fronts, this has meant improving the central government’s ability to deliver services to the population.
But “there were few efforts to engage Afghanistan’s tribes, sub-tribes, clans, and other local institutions,” laments Seth Jones, who worked closely with US Special Operations Forces in Afghanistan (For details see S. G. Jones, “Lessons from the Tribal Areas”, in Brian Michael Jenkins and John Paul Godges, (eds.), The Long Shadow of 9/11: America’s response to Terrorism, Rand corporation, Pittsburgh, 2011, pp. 37-45).
The US dependence on Afghan warlords militated against the idea of peaceful and democratic Afghanistan. The warlords practiced no less violence than the Taliban. They used the American military and economic assistance for consolidating their role in different pockets of Afghanistan. The intelligence provided by the warlords to the US was based more on their desire to sort out personal feuds with other warlords than to give authentic information about al Qaeda and Taliban hideouts. Instead of creating an independent Afghan National Army, it was suggested at the Bonn conference that the Afghan National Army (ANA) be recruited from these militias (See for details Sam Zia-Zarifi, “Losing Peace in Afghanistan”, Human Rights Watch, World Report 2004).
The intervening power’s military-driven foreign policy was explicit in the reports pointing to Afghan detainees being tortured in Bagram and other US detention centres. An article in the Guardian (UK) stated that in Bagram and eighteen other US detention centres and firebases around Afghanistan, Afghan detainees were regularly tortured (D. Campbell and S. Goldberg, “US tortured Afghanistan Detainees”, Guardian, June 23, 2004). While successful nation-building process requires patience and perseverance American-led troops seemed to lack these qualities. There was an instance where copies of Koran were found to be burned by US troops and in another instance, a US soldier recklessly opened fire and killed many civilians in a village near Kandahar (Praveen Swami, “Afghanistan as “Lost Cause”, The Hindu, March 20, 2012).
Apart from these cases, many civilians kept losing their lives by American-led forces as a collateral damage to the war against the Taliban. While the Obama Administration channelized more security and economic aid to bolster Pakistan to fight terrorism under the Af-Pak strategy, Afghan state institutions remained weak and relied predominantly on American troops and air power to deal with the rising menace of insurgency and the Trump Administration raised the possibilities of escalation of conflicts and more devastations in Afghanistan – as the insurgents could not be neatly identified and separated from civilians- by taking a coercive gesture in the beginning.
Although the incumbent Administration in the US was seen shifting its stance by opening up space for direct talks with the Taliban, the resilience of the militant group with its farfetched demands and the geopolitical and security concerns of the US are likely to be at odds raising the possibilities of more conflicts. In most cases, the intervening powers are likely to lose legitimacy given the operational complexities in target-countries and this happened to the American-led mission whose legitimacy gradually eroded and the Taliban have been able to receive tacit support from certain sections among affected people. The more the US-led mission would be away from Afghans, the more will be the possibility that the Taliban would be treated as a home-grown movement than propped up outside.