Abdullah: Review of security pact with U.S. not to help the security situation

The Chief Executive of the Government of National Unity Abdullah Abdullah reacted at the recent moves by certain lawmakers and politicians regarding the review of the bilateral security pact with the United States.
Date of Publication : Monday 17 September 2018 15:46 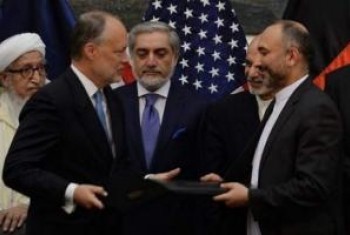 In his speech during the Council of Ministers meeting in Kabul, Abdullah said the review of the bilateral security agreement between Afghanistan and the United States would not have a positive impact on the security situation of the country.
Abdullah further added that the country still faces threats from Al-Qaeda and other militant and terrorist groups and networks, emphasizing that such threats existed before the signing of the pact as well.
This comes as certain lawmakers, last week, approved the recommendations for the review of the bilateral security agreement between Kabul and Washington.
Last week’s general session of the parliament was organized by Deputy House Speaker Humayoun Humayoun.
He had said that the bilateral security agreement has not yielded positive results and Afghanistan has not benefited from it.
Humayoun further added that some lawmakers want the review of the security agreement as the Afghans are still giving sacrifices due to the deteriorating security situation.
Story Code: 84076
Short url: http://www.payam-aftab.com/vdcg3z97.ak9tu4j5ra.html
Source : KP
Quick US pullout to fuel bloodshed, warns Daudzai
Khalilzad shares details of U.S.-Taliban talks in Qatar with president Ghani
Afghanistan: Geopolitical Situation Revisited
Talking to the Taliban for peace to be useless
Analyst: Afghanistan becoming ‘graveyard’ of US troops
Copyright© Payam-aftab.com, all rights reserved