The brewing relations between China and Afghanistan could create ripples in the ties between Beijing and Islamabad.
Date of Publication : Tuesday 11 September 2018 10:11 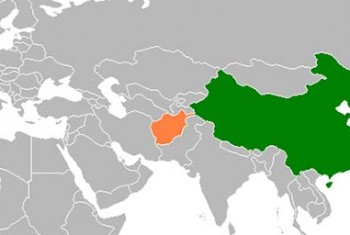 According to an op-ed - 'Afghan Connection' written by Huma Yusuf, published in Pakistan's English daily The Dawn, the growing bonhomie between China and Afghanistan presents a scope as well as bottlenecks in the strong ties between Islamabad and Beijing.
The writer says that China has already gained a foothold in Afghanistan. Recently, the country reportedly decided to train Afghan troops to station them in the Wakhan Corridor that links Badakhshan province in Afghanistan with western China. It is also considering purchasing a combat aircraft on Kabul's request.
Also, over the last three years, China has given USD 70 million worth military aid to Afghanistan. The country also held deliberations with the representatives of Afghan Taliban over the past year and reportedly broke the Eid-ul-Fitr ceasefire with Islamabad.
Yusuf lists down three reasons for China's growing interest in Afghanistan. First, China wants to clamp down on the radicalisation by the Uighurs as it has grave concerns that the disgruntled and oppressed Uighurs would defect to Afghanistan for terror training. China also fears that militants affiliated with both the East Turkestan Islamic Movement (ETIM) and the dreaded Islamic State (IS) groups would carry out attacks by having easy access to western China via the Wakhan Corridor.
She adds, "The main goal of Chinese investment in a 'mountain brigade' in the Wakhan Corridor is to block this two-way flow. This also explains why the majority of Chinese development spending in Afghanistan - $90m worth in September 2017 alone - is concentrated in Badakshan, the proximate Afghan province."
According to media reports, China is reaching out to the Afghan Taliban in a bid to quell the perception that its people are anti-Muslim.
China's another important goal is to ensure the safety and security of its grand Belt and Road Initiative (BRI), the brainchild of President Xi Jinping. Beijing has recognised that "Kabul offering sanctuary to various terror groups poses the greatest threats to its flagship projects under the China-Pakistan Economic Corridor (CPEC), and seeks to stabilise the country before the corridor is fully 'online'."
Last, but not the least, the increasing Chinese influence in Afghanistan will delink the American grip over the strife-torn country, something Beijing would increasingly attempt to do as ties between China and the US continue to intensify over tiff in trade tariffs.
Yusuf elucidates, "These drivers present Islamabad with an opportunity to equalise its relationship with Beijing. After all, China does not know Afghanistan the way Pakistan does. It requires Pakistani interlocutors to achieve its goals. And in exchange for facilitation, China will be the heavy hitter ensuring Pakistan's seat on the table during any peace negotiations."
The writer says that China is playing a crucial role in brokering talks between Pakistan and Afghanistan. Beijing has urged the new government of Imran Khan to establish a crisis prevention mechanism to prevent flare-ups escalating from incidents such as terror attacks within Afghanistan. In December, China was instrumental in hosting a trilateral summit, where Kabul, Islamabad and Beijing jointly made a commitment to the Afghan Taliban to come to the negotiating table by having peace talks.
However, the evolving relationship between China and Afghanistan could pose a threat between Sino-Pak ties. Yusuf opines that China's main aim in Afghanistan is to keep the ETIM out of the scene, while Pakistan's goal would be to put India out.
China will go all-out and will use its "current resources", including India, to achieve its objectives in Afghanistan. During the Wuhan summit in April, Prime Minister Narendra Modi and President Xi agreed to jointly cooperate in Afghanistan, including the launching of economic projects to boost stability and growth in the war-torn country. China might knock Pakistan's doors to curb on the alleged tolerance of terrorists in Afghanistan.
"So far, Islamabad has not appeared averse to Chinese intervention in its security policies. It remains to be seen whether Afghanistan will be the forge that further melds the allies, or the anvil on which the relationship faces blows," Yusuf further says.
Story Code: 83871
Short url: http://www.payam-aftab.com/vdcizvav.t1apy2lict.html
Source : WION
Reporter : Hafizullah Rajabi
China-Afghanistan-Pakistan dialogue stresses connectivity for regional development
To enhance Afghan reconciliation process, China, Pakistan vow
India’s Afghanistan Policy: A cause for apprehension
Delhi to Islamabad: Introspect about your role in Afghanistan
Delhi to Islamabad: Introspect about your role in Afghanistan
Copyright© Payam-aftab.com, all rights reserved