Last week, the Taliban carried out a series of deadly attacks throughout Afghanistan, leaving over 500 dead and dozens wounded. Although a peace offer remains on the table, the Taliban are on the move, destroying any hope for peace and reconciliation.
Date of Publication : Sunday 26 August 2018 13:21 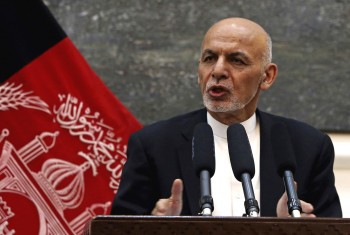 The Ghazni attack was an embarrassment for the Afghan government and the international community. It revealed one of the most critical security challenges for the Afghan and U.S. security forces. The Taliban have 20,000 to 40,000 active fighters and control roughly 43 percent of Afghan territory. They maintain a feared presence across the entire country, and international support for law and order against them is starting to dwindle.
One day, Afghan President Ashraf Ghani announced a conditional cease-fire with the Taliban to honor the Muslim festival of Eid al-Adha. The next day, the Taliban responded with rockets while Ghani was discussing the importance of the cease-fire live on national television. Although the Taliban remained silent, the United States, Pakistan, and international community praised the cease-fire.
In July, the U.S. held direct talks with the Taliban in Qatar to facilitate a negotiated settlement with the Afghan government, despite the Taliban’s rejection of peace talks offered by former President Hamid Karzai and President Ashraf Ghani. Their willingness to sit down with the U.S. to mediate a peace agreement is suspiciously a display to keep all foreign military presence out of Afghanistan, thereby leaving the country completely vulnerable to their extremist control.
The Taliban’s vision is to replace the current government with the Islamic Emirate and oust the U.S. from Afghanistan. Both the Afghan and American governments acknowledged the Taliban as a political party to end the 17 years of war. The Taliban will continue to fight in order to fatigue Afghan and international forces, and challenge the authority of the Afghan government, while presenting themselves as a stronger adversary.
Yet, the Taliban are not self-governing and do not have a strong leadership. Some elements of the Taliban are willing to negotiate, but not all. One group makes peace, the other group attacks. They have been divided and fragmented, particularly after the death of their leader, Mullah Mohammad Omar, in 2015.
Mullah Akhtar Muhammad Mansour was chosen as the new leader, but he was confronted by several adversaries, including Mullah Rasoul, Abdul Manan Niazi, and Mullah Mansour Dadullah, who were all influential forerunners of the Taliban group. When Mullah Akhtar Mansour was killed in an American drone strike in 2016, Haibutalah Akhund Zada was elected to be new leader, but there is an ongoing struggle to establish a unified leadership. It is possible to make peace with Haibutllah, but Mullah Manan Niazi and his followers, who operate in the Western region of Afghanistan and are backed by Iran, are unwilling to negotiate. While Haibatullah wants peace, Niazi declares an extension of the jihad until foreign troops leave Afghanistan.
Given the peace offers and historical events in Afghanistan, the Afghan government and the Taliban could work on a unified people-centric government because the Afghan government is unable to wipe out the Taliban and the Taliban are incapable of taking over Afghanistan and creating the Islamic Emirate they want.
Although the Taliban continue to fight, both the Afghan and American governments should continue to hold talks with the faction of the Taliban who are intent on a negotiated settlement and compromise with the Taliban’s foremost demands: Shared central government, modifications of the Afghan constitution regarding social and religious matters, such as Sharia, social norms, and the withdrawal of foreign forces. It’s more likely that a conferred reconciliation can lead to a permanent cease-fire with the Taliban, but if the Taliban continues to enjoy the safe havens and support from Pakistan, they will endure the fight with unstipulated demands.
The U.S. and international partners have two roles moving forward in Afghanistan. One is to support the Afghans through capacity-building, educational programs and economic efforts so that the indigenous people can rebuild their resiliency against extreme regimes that jeopardize the national security of Afghanistan. Next, they must facilitate and support a negotiated settlement by blocking foreign fighters and state-sponsors of terrorism from interfering in the Afghan peace talks.
Peace talks with the Taliban will not bring an absolute peace in Afghanistan. A portion of the Taliban, along the 21 other insurgent groups such as the Islamic State, the Haqqani Network, the Islamic Movement of Uzbekistan and other foreign fighters, will continue to fight in Afghanistan. But peace is still possible, even if the path is complex and controversial. It requires an ongoing determination and commitment with peace as the end goal rather than control, power, or an agreement based on exclusively monetary considerations.
Story Code: 83414
Short url: http://www.payam-aftab.com/vdcbaabw.rhbf8pe4ur.html
Source : Washington Examiner
Reporter : حفیظ‌الله رجبی
Copyright© Payam-aftab.com, all rights reserved