As Taliban fighters continue to battle Afghan forces for control of the provincial capital of Ghazni city, its fighters overran the remote district of Ajristan and routed elite Afghan Commandos who were assigned to defend it. Upwards of 100 Commandos are reported to have been killed after their unit melted away into the mountains.
Date of Publication : Monday 13 August 2018 14:43 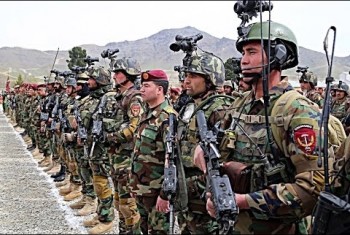 On its official website, Voice of Jihad, the Taliban claimed it overran the “Ajristan district administration center, police headquarter and other installations” on the afternoon of Aug. 11. The Taliban claimed it killed “an infamous enemy commander Baido along with 5 others,” and captured 25 Afghan security personnel.
Ironically, the Taliban appears to have underestimated the extent of the casualties inflicted on Afghan forces. The New York Times, in a report updating the status of the fighting in Ghazni City, confirmed that Ajristan has fallen to the Taliban and the “elite army commando unit” stationed there has been routed.
“[T]he Taliban seized control of the Ajristan District, and the elite army commando unit that had been defending the district disappeared for two days and their superiors were uncertain of their fate,” The Times reported. “When they found out on Sunday, estimates of the dead ranged from 40 to 100. Twenty-two survivors were carried to safety on donkeys by rescuers who found them lost in the mountains.”
The Taliban has demonstrated that it is able to effectively hit multiple locations at the same time, and with good results. The Taliban has blocked the Kabul-Kandhar Highway in Wardak province and successfully overran Ajristan, all while tying up Afghan forces in a bloody battle for control of Ghazni’s provincial capital.
Afghan Army Commandos and its Special Forces are considered the best outfits in the Afghan military. These units are well armed and equipped, and benefit from close training with US military counterparts. Commandos and Special Forces are often at the tip of the spear when it comes to clearing district centers and bases that have been overrun by the Taliban.
Resolute Support, NATO’s command in Afghanistan, is focusing on expanding these key units in an effort to bolster beleaguered Afghan units who are fighting both a persistent and organized Taliban insurgency. Expanding forces such as the Commandos and its Special Forces often means that recruiting requirements and the intensity of training must be compromised. In a country such as Afghanistan, with high illiteracy rates, the pool of recruits for these elite units is already small.
The fact that such an elite unit was overrun and took a high rate of casualties my be an indication that the Commandos and Special Forces may be overworked and are losing their effectiveness. These units run at a high operational pace, and have taken significant casualties as of late. In one of the more daring operations, the Taliban killed 10 Afghan Special Forces soldiers and eight policemen during an ambush in Farah province in March of this year.
Story Code: 83029
Short url: http://www.payam-aftab.com/vdcdnz0j.yt0sx6me2y.html
Source : Lon War Journal
Reporter : حفیظ‌الله رجبی
Taliban, U.S. Engage in Twitter Spat Amid Rise in Afghanistan Violence
Afghans Claim Foreign Combatants Fighting Alongside Taliban In Violation Of Peace Deal
Taliban Constitution Offers Glimpse Into Militant Group's Vision For Afghanistan
Protect Afghanistan, world from Taliban
Taliban Rejects Call for Ramadan Ceasefire in Afghanistan