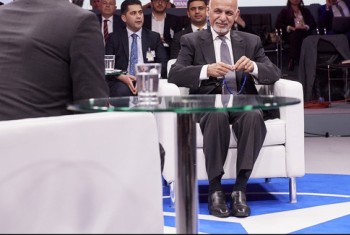 Ghani said he does not believe President Donald Trump will pull American troops from the war there, minutes after the two leaders met inside the NATO Summit.
NATO leaders emerged from Thursday’s meeting unified in their support for funding the war through 2024, showing no hesitation to continue with what used to be a contentious topic for the alliance.
“Today, we also decided to sustain our presence in Afghanistan until conditions indicate a change is appropriate,” the leaders said in a joint statement.
Ghani said Trump was fully supportive of continuing in Afghanistan, during a previously scheduled interview on stage at a NATO-organized sideline conference of national security leaders.
“Afghanistan is a subject of consensus; it’s not a subject of dissent,” Ghani said in the one-on-one interview with this reporter. “There was uniform support across the board. Support will be extended to 2024.” Ghani said that support including backing for the current effort for peace and recent ceasefire with the Taliban.
“So I’m delighted to say that, contrary to the past where there was question of this dialogue between Afghans and the international community, now it’s a real dialogue, it’s a constructive dialogue, the efforts are based on mutual trust. And from President Trump all the way to the last speaker expressed support for our effort and pledged to provide condition-based support rather than time-bound effort, which has characterized past efforts.”

According to Ghani, Trump, in the NATO meeting, said “he thought that the strategy was working—that it was condition-based….and he thanked NATO partners for the support that they provided to make the strategy a success.”
When asked about Trump’s public assertions that he wants to bring America’s troops home, Ghani responded, “I think that was before he talked to me,” drawing laughs from the audience. “We’ve built an excellent relationship.”
“The president has a style and you need to be able to make your case succinctly. And I think that I’m proud to say we have made our case succinctly. And the other is that he looks for evidence. It’s an evidence-based…this strategy for Afghanistan has been entirely prepared.”