Afghans Hopeful, But Worried About Future 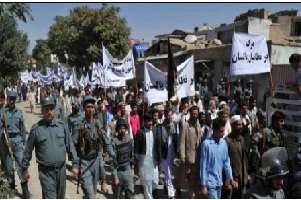 There is a growing middle class in Afghanistan’s cities, including the capital Kabul.


It is an increasingly urban population. They are Muslim, modest, and enjoy having fun.


Places like this bowling alley are new to Afghanistan, as is the idea of women playing sports with men, even their brothers, in public.


Sarwar Sarwari says the bowling alley opens up new possibilities. “To me, I think, it is a step toward democracy, where you see women and men come together and play something like this," he stated. "I never had this in Afghanistan when I was a child.”


But Sarwari says people are uncertain about their future. “Nervousness is all around, you can feel it in the city, within the government, within the people, when people talk around. I am hoping that things will work out to the best in this country, because people put in [worked] their hardest to make it happen,” he said.


Extravagant wedding halls show there is a lot of money is some parts of Kabul.


There are many businesses investing here.

But Afghanistan’s six national flags and six national anthems in less than 40 years are reminders of how different leaders tried to shape the country’s direction.


Afghans are very different from 11 years ago when the Taliban was thrown out. They are more educated. More people live in cities and almost half own cell phones. But many remain uncertain about the future.


Afghan analyst Omar Sharifi says violence will not dictate who runs the country. “Now nobody sees a coup d’etat, or overthrowing the government, or the taking by force of power as a legitimate means. The people believe in elections as a legitimate means of establishing authority,” he explained.


Despite the political changes, many women in Kabul remain too frightened to speak on camera. Privately, they say they fear losing the few rights they have gained in the past decade.


In a male-only billiards hall, patrons worry about the increasing violence and about the future of Afghanistan’s democratic government.


Yar Gul Nader Safi is pessimistic. “The future as I can see it: for the past two months there are a lot of suicide attacks, and also the Taliban they are attacking all different places. It seems to us that it [the future] will be dark,” he said.


After 40 years of dramatic political swings, many Afghans in Kabul worry that the country’s political future may be similar to its tumultuous past.