Investment in Afghan minerals a potential factor for security 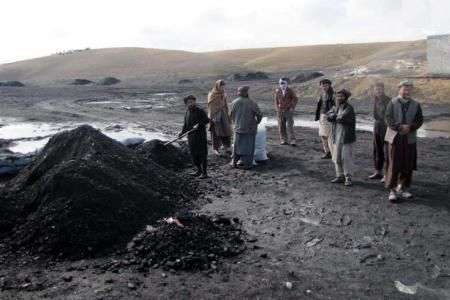 .
Afghanistan, according to officials, has minerals worth around 3 trillion U.S. dollars which, if extracted and utilized properly, would help rebuild the war-battered country and ultimately improves the living conditions of the people.
"In the past I had worked in Iran as a daily wager to support my family in Afghanistan. But some three years ago my family called me from Logar province and asked me to come home and work for Aynak Copper mine project, I felt happy and returned home and since then have been working with the archeological section, in Aynak area and receives a 'reasonable' salary," a resident of Logar province Abdul Ghani Khan told Xinhua.
Metallurgical Corporation of China (MCC) had won the bidding in 2008 and agreed to invest more than 3.5 billion U.S. dollars in the Aynak Copper Mine in Logar province 60 km south of Afghan capital Kabul, the ever-biggest investment in the war-ravaged Afghanistan.
The war-torn Afghanistan, according to the U.S. geological survey released in mid 2010, has huge reserves of untapped natural treasures including copper, iron, cobalt, lithium, gold, mercury and others worth around one trillion U.S. dollars.
However, Afghan Minister for Mines Wahidullah Shahrani has said that mineral deposits in his country could be worth up to 3 trillion U.S. dollars.
The implementation of Aynak Copper project and sub-agreements inked with MCC which also include railway construction, would create around 4,000-5,000 job opportunities directly and thousands more indirectly which is vital for stabilizing economy, according to Minister Shahrani.
Since security and economic development are inter-linked, many Afghans believe that durable security will not return in the country unless and until job opportunities are provided to the economically impoverished people.
"I laid down my arm two years ago and resumed normal life, but in return I have received 2,000 Afghanis (1 U.S. dollar equals 49. 43 Afghanis) which is no remedy to my ordeal," a former Taliban fighter Fazludin told this scribe.
"I need permanent job, regular income and to ensurence of my security," he further said, adding economic hardship would push anyone to the wall and lack of security would force anyone to take self-defense measures.
Another former anti-government fighter Baba who gave up militancy and handed over his weapon to authorities in northern Baghlan province on Saturday also called for providing job opportunities.
"We want the government to ensure justice, accelerate reconstruction process and provide job opportunities" Baba the commander of 13 armed militants told newsmen after handing in his assault rifle to police.
The root cause of endemic instability in Afghanistan, at the eyes of public in Afghanistan is chronic poverty and high rate of unemployment.
"Usually the son of poor people is exploited by Taliban, by drug barons and other evils. Seldom is the son of well-off killed. It is the son of have-nots who leave the country to support family but dies on the way, it is the son of poor fathers joins Taliban to support the family but killed in clash," said a former Taliban foot soldier who declined to give his name.
Investment in Aynak Copper Mine has already begun delivering and hundreds of Afghans have been absorbed there to work, spokesman for the Ministry of Mines Jawad Omar said.
"More than 3,000 people including 243 Chinese experts have been working in Aynak," Omar told Xinhua on Sunday.
Out of these, 1,660 are personnel of security forces, 300 are de-miners, while 296 are working in the archeology field and 400 others are involved in construction section with reasonable salary.
"Of course, security is linked with economic development and vice versa. No doubt investment in projects such Aynak copper mine, Hajjigak iron ore and other minerals would provide thousands of job opportunities and eventually lead to poverty alleviation which is essential to stabilizing economy and security," the official went on to say.
Launching any development projects in Afghanistan where some 9 million people out of around 30 million, according to officials, live under poverty line, would help bring prosperity and stability.