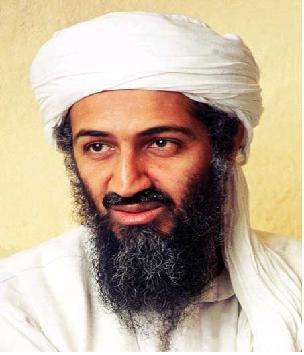 Osama Bin Laden died eight years ago during the battle for Tora Bora in Afghanistan, either from a US bomb or from a serious kidney disease.

Or so the conspiracy theory goes.

The theory that has developed on the web since 9/11 is that US intelligence services are manufacturing the Bin Laden statements to create an evil bogeyman, to justify the so-called war on terror in Afghanistan, Iraq and back at home.

So is the world's most wanted man still alive?

For a decade, Osama bin Laden has managed to evade the world's superpower and the biggest manhunt in history.

Bruce Riedel, who chaired President Barack Obama's Afghanistan/Pakistan policy review, and who has seen the intelligence on Bin Laden, says the trail has not so much gone cold as "frozen over".

In the absence of any concrete intelligence, Bin Laden has become shrouded in myth and rumour.

Numerous audio and video statements purporting to be from Bin Laden have been released, but their authenticity has been continually questioned.

The veracity of all of the videos is questioned by David Ray Griffin, a former theology professor and member of the 9/11 Truth Movement, which also questions mainstream accounts of the attack on the World Trade Centre.

"And if somebody is faking Bin Laden videos, then that leads to the suspicion that all the videos and audio tapes have been faked."

His first example is a video released by the US Department of Defense in December 2001. In it, Bin Laden confesses to 9/11, yet Mr Griffin points out that al-Qaeda has only rarely admitted responsibility for terrorist attacks.

He also maintains that the Bin Laden figure looks very different to previous footage - fatter, with shorter fingers, and that he is even writing with the wrong hand.

Most of Bin Laden's statements are audio only. Only two that show Bin Laden speaking have been issued since 2001.

Griffin claims both are fakes.

He argues that a video released in October 2004 - just days before the presidential election - lacks the religious rhetoric contained in previous statements.

But it is the last video, released in September 2007, that has attracted most attention.

Mr Griffin calls it "Blackbeard: the terrorist tape". Bin Laden's trademark grey beard has been replaced with a neat, jet-black beard, and there are a number of frames in the video, where Bin Laden carries on speaking but the picture of him freezes.

One former CIA agent also questions its authenticity. Robert Baer dismisses the suggestion of a conspiracy by Western intelligence but thinks that al-Qaeda may have faked the video.

"[al-Qaeda has] an interest in manipulating it to look like current tapes," he says. "You can digitally manipulate voice to say anything. You can change months, years, you can tape vowels and syllables and put it into a recording and change it."

Andy Laws, a former military imaging analyst for the RAF, was asked by the BBC to forensically test an undisputed Bin Laden tape from 1998 against the 2001 so-called "confession tape" and the 2007 "blackbeard tape".

He says the fact that Bin Laden appears fatter in the 2001 tape is down to the editing process, when subtitles were added and the image was squashed. His conclusion is that all the videos are of the same person - Bin Laden.

Furthermore, Mr Laws says it is not realistic to think that the US military would fake such tapes.

"Technologically in this day and age, those kinds of things can be done, but not quietly," he says.

"There would be a number of people involved and word of it would have spread by now."

"Whenever he speaks on audio tape, he always says something in there that's fairly current. Also, the US National Security Agency (NSA) and UK Government Communication Headquarters (GCHQ) are very good at voice prints," he says.

Mr Scheuer concludes that if it was not Bin Laden's voice, these organisations would make sure governments were well aware that the tapes were fakes.

"I think those conspiracy theories that he is dead are pretty much laughable," he says.

"It's easier to explain things away with a conspiracy than to face up to the difficult reality.

"In this case, the difficult reality is that we're trying to operate in possibly the worst area in the world and track someone who's very crafty and elusive and putting considerable effort to stay off our radar."